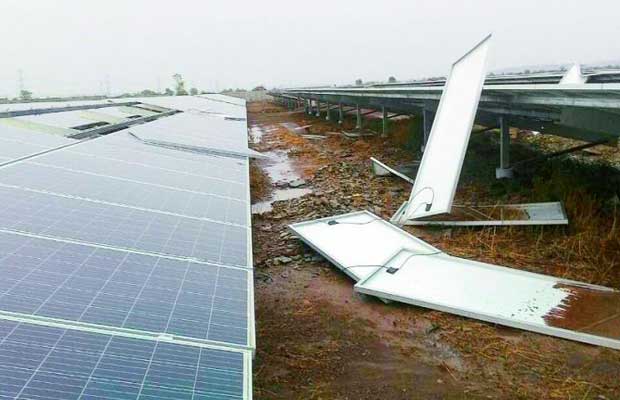 Solar Park is touted as one of the largest solar project with 1,000 MW generation capacity at Gani-Shakunala in Kurnool district

Strong wind and thunderstorm has reportedly caused huge damage to Kurnool Solar Park on Sunday night. The Solar Park is touted as one of the largest solar project with 1,000 MW generation capacity at Gani-Shakunala in Kurnool district.

According to Deccan Chronicle the solar panels erected at the project by Greenko and Softbank were uprooted by the winds. The damage due to gales is expected to be around Rs. 2 crore.

An executive engineer at the solar park, Sudhakar- speaking to the publications said the intensity of the wind was so high that thousands of panels installed on the sites by Greenko and Softbank were uprooted, wind also damaged staff quarters and workers facilities. He further added that separate teams have been sent by Greenko and Softbank at site to access the damage.

CPM leader Prabhakar Reddy said the publication that recently a transformer exploded at the Greenko project, the management was not responding to the problems of the workers. Instead Greenko was targeting media personnel he added.