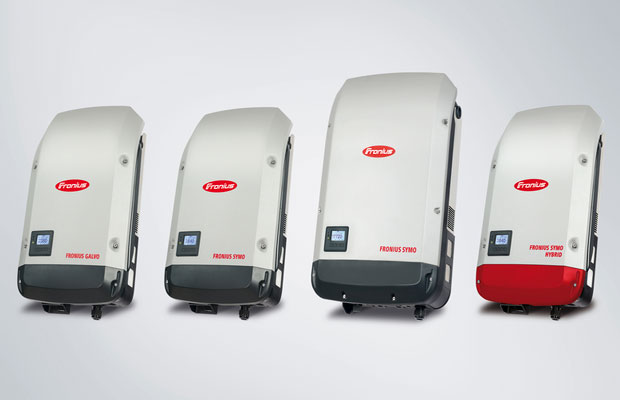 With SnapINverter from Fronius, The vision of 24 hours of sun is growing ever closer.

Solar technology pioneer Fronius has developed a generation of inverters that are inspiring planners, installers and PV system operators alike: the SnapINverter. These devices are already being used successfully in a wide range of applications around the world, from family homes and public buildings to industrial complexes and warehouses. Extremely flexible and packed with intelligent, future-proof functions, these inverters are helping to ensure our vision of 24 hours of sun – a global energy supply based on 100% renewable sources – is much closer to becoming a reality.

With the SnapINverter models of Eco, Primo, Galvo, Symo and Symo Hybrid, Fronius covers the entire spectrum of inverters for photovoltaic systems of any size. The devices are available with nominal outputs of 1.5 to 27 kW and all follow a uniform design, much to the advantage of dealers and installers: “If you know at least one of our inverters in the current range, then you already know how to easily install and operate them all,” explains Martin Hackl, head of the Fronius Solar Energy Division. Fronius is the global leader in developing innovative technologies for harnessing renewable energy and its Solar Energy Division is celebrating its 25th anniversary this year.

Power for the Canadian Arctic

SnapINverters are not only the ideal solution for PV systems of all sizes, but they are also suitable for use in a wide range of operating conditions. In the Canadian Arctic, for example, three Fronius Primo inverters – as a clean and sustainable alternative to diesel generators – are providing the isolated Sachs Harbour community with a reliable supply of energy. The Fronius inverters function at an ambient temperature of as low as -40°. For the 132 inhabitants, the photovoltaics solution means greater independence from fossil fuels and expensive price peaks.

Photovoltaics Project as a Model for the Sri Lankan Population

Bandaranaike International Airport in Sri Lanka has also recently opted for solar power. A system with an output of almost 78 kWp has been installed on the roof of the maintenance building, which covers roughly 20 percent of the building’s energy requirements. The three Fronius Eco inverters in use can be upgraded at a later date thanks to their plug-in card slots and open interfaces, making them a future-proof investment. “The project should serve as an example in order to arouse public interest in renewable energies,” explains project manager Kushan Jayasuriya.

Gaisano Capital, situated in the provincial capital of Iloilo City in the Philippines, demonstrates that the use of solar energy on a larger scale is also lucrative: the shopping centre chain has recently commissioned a 1 MW roof-mounted system that covers up to 50 percent of the building’s daily energy needs using a total of 46 Fronius Symo inverters. These inverters boast a dynamic feed-in regulation function that allows the operator to use the generated power in a particularly efficient manner.

The Dream of an Energy-Independent Home

Particularly attractive for private builders: the Fronius Energy Package combines the intelligent functions of the SnapINverter with a storage solution in the form of a battery. One example of this technology can be found in Schwertberg, Upper Austria, where builder Boris Maier has made his dream of an energy independent home a reality. With an annual consumption of approximately 2000 kWh, the Fronius Energy Package working with an additional Fronius Symo inverter covers over 90% of the energy requirements. The rest is covered by a pellet oven with an integrated 600 W Stirling generator, meaning that the house is completely independent of the public grid. “An innovative house needs innovative, pioneering companies like Fronius that have extensive experience with inverters and storage options,” underlines Boris Maier.