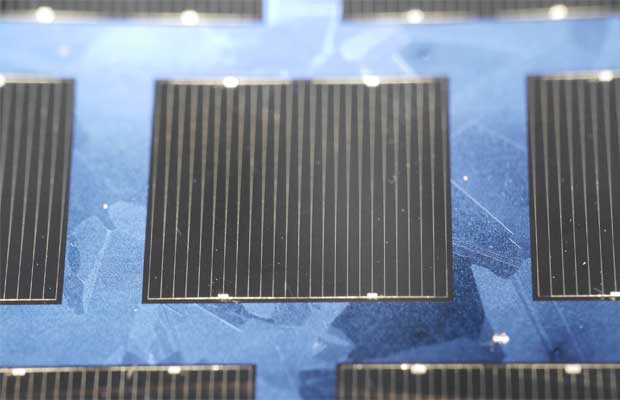 Researchers at Fraunhofer ISE have produced a multicrystalline silicon solar cell with 21.9 percent efficiency, which successfully brings the world record back to Freiburg.

Higher efficiencies and optimized processing steps are decisive for decreasing the cost of solar electricity even further. Both of these are an integral part of the photovoltaic research at the Fraunhofer Institute for Solar Energy Systems said the company in a statement.  The record Multicrystalline Silicon solar cell consists of n-type high performance multicrystalline silicon, or HP mc-Si. Compared to p-type silicon, this material shows a higher tolerance to impurities, especially iron. The industrial production today uses multicrystalline p-type silicon material with average solar cell efficiencies of about 19 percent. The new material and technology approaches applied by Fraunhofer ISE for the record cell have the potential to improve the efficiency of multicrystalline silicon even further in the near future.

“We are very happy about this excellent result, which is due largely to the fact that Fraunhofer ISE’s expertise runs along the entire value chain of silicon photovoltaics,” says the visibly pleased Institute Director, Dr. Andreas Bett. “At the Institute our expertise spans the entire range from the crystallization of silicon through to the quality assurance of PV power plants. The research areas of material development, characterization and cell technology all played a part in the development of the world record cell.”

The various research groups at Fraunhofer ISE consulted continuously, optimizing the material and the cell process in tandem. Dr. Stephan Riepe, Head of the Group “Silicon – Crystallization and Epitaxy,” explains the procedure as follows: “In our Silicon Material TEchnology Center SIMTEC, we adjusted the crystallization process with the goal of creating a material optimized for the planned solar cell processing procedure. We worked closely and in constant exchange with our colleagues until we all achieved our common target of world record efficiency.” The work of the ambitious researchers at Fraunhofer ISE, however, continues further. The “multiTOP” project, in which the record cell was achieved, continues to run up to March 2018. The project is headed by Dr. Jan Benick, Team Leader of Innovative Clean Room Technologies for High Efficiency Silicon Solar Cells. He looks into the future: “Our goal is to develop an advanced cell technology for the n-type multicrystalline wafer that really demonstrates its full potential. The question is, how far can we get to closing the efficiency gap to monocrystalline material.” The colleagues in solar cell characterization acted as a decisive link between the researchers in materials and cell technology. Dr. Martin Schubert, Department Head of Characterization and Simulation assumed the role of navigator: “With our characterization work, we were able to help our colleagues in materials to improve the material quality and to customize it for the production process. On the other side, we were able to provide our colleagues in solar cell development with tips on where the relevant losses in the current cell technology can be found.”

In addition to the cross-sectional cooperation between the ISE specialists in fields of materials, characterization and cell technologies, Fraunhofer ISE also applied its past developments in creating the new world record cell. “The TOPCon technology, developed at Fraunhofer ISE, was used for the back side contacting of the record cell. With this technology we were able to achieve a world record efficiency of 25.3 % last year for both-sides contacted monocrystalline silicon solar cells,” explained Dr. Martin Hermle, Department Head of High Efficiency Silicon Solar Cells at Fraunhofer ISE. The TOPCon technology has a passivated backside contact, applied over the entire rear surface without patterning. This simplifies the manufacturing process and results in higher efficiencies at the same time. The newest world record shows that the TOPCon technology is suited both for mono and multicrystalline silicon, opening up its potential for the entire silicon market. Over 35 years of R&D along the entire value chain has made Fraunhofer ISE one of the top research institutes for solar cells throughout the world.

The project “multiTOP” was funded by the German Federal Ministry for Economic Affairs and Energy BMWi.