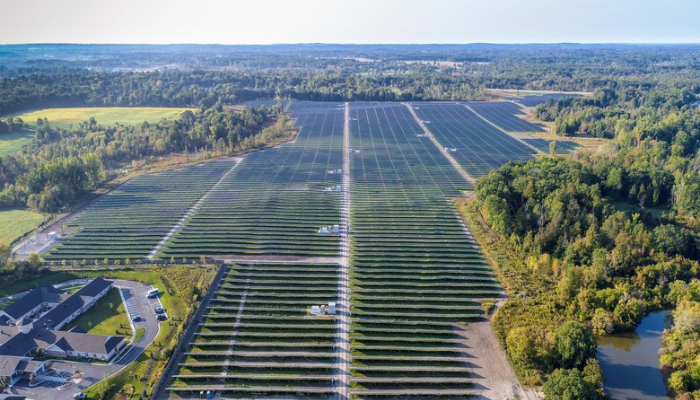 America-based automobile manufacturer giant, Ford Motors Company has announced that it will soon be able to credit 100% of its electricity supply in Michigan to sustainable energy thanks to a new clean energy deal with DTE Energy. By the new deal disclosed today, DTE will increase Ford’s solar energy capacity in Michigan by 650 megawatts by 2025. As per Ford Motors, this purchase is the largest renewable energy purchase ever made in the United States by a utility and represents a strategic investment in Michigan through DTE’s MIGreen Power initiative. The arrays, ultimately constructed, will roughly double the amount of solar energy already deployed in Michigan, according to statistics gathered by the Solar Energy Industries Association.

DTE’s efforts in renewable energy have produced more than 4,000 new jobs in Michigan since 2009. According to DTE, the installation of the solar arrays would result in the creation of 250 temporary jobs and 10 permanent positions. The additional tax money these projects provide benefits the local communities where DTE’s renewable energy installations are located. Roads, schools, libraries, and first responders are just a few of the community support services that can be funded with these funds.

According to the company, the initiative currently has 600 firms and more than 62,000 home consumers signed up, totaling 2.8 million megawatt-hours of renewable energy. Moreover, once fully completed, the 650 MW solar project will nearly double Michigan’s current solar capacity, according to the information DTE Energy obtained from the industry group Solar Energy Industries Association (SEIA).

“Ford Motors was the first large industrial customer to enroll in our MIGreenPower program in 2019 and we thank Ford for its continued commitment to adopting MIGreenPower to help decarbonize its operations and accomplish its sustainability goals,” said Jerry Norcia, Chairman, and CEO of DTE Energy.

Ford Motors claims that it is presently producing its only all-electric model, the F-150 Lightning truck, in its Dearborn facility in Michigan. For the home charging systems, they worked with storage supplier Sunrun, even though Ford has not yet completely embraced the electric vehicle (EV) market.