Floating PV panels are making a splash in Southeast Asia, and a new study expects floating solar developments, to increase 100-fold in the next 5-15 years 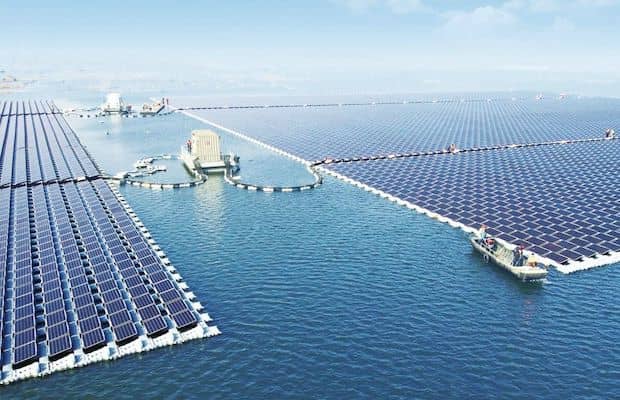 Floating PV panels are making a splash in Southeast Asia, where gigawatts (GW) worth of utility-scale solar power are planned in the coming years. Development plans are in the works in Thailand and Vietnam as large-scale floating solar installations, with smaller utility-scale floating PV developments being proposed in Indonesia, Singapore and Myanmar. 100-fold

Independent energy research firm, Rystad Energy expects large-scale floating PV developments, typically installed on dams and reservoirs, to increase one hundred-fold in South East Asia over the next five to 15 years as countries in the region look to substantially increase their share of renewable energy in the power mix. This will open new market opportunities to both new and existing players in the industry.

“Floating PV offers an attractive alternative for large and mega-scale ground-mounted utility solar development, allowing beneficiaries to take advantage of under-utiliSed dams and reservoirs,” says Mihn Khoi Le, an analyst on Rystad Energy’s renewables team. “We expect floating PV capacity to grow from current levels of 0.04 GW to 3 GW in the next 10 years.”

“After a ground-mounted solar boom, Thailand is now turning its sights to floating PV,” Minh added. 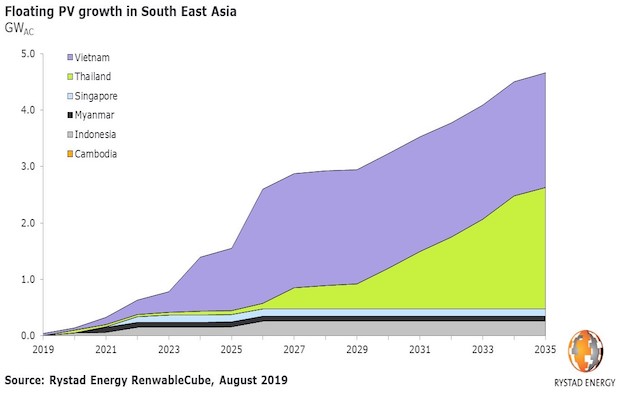 The report further adds that the country is taking the lead in Southeast Asia and currently has several developments in the pipeline, with the floating PV setups to be installed at nine different hydroelectric dams. The Electric Generating Authority of Thailand (EGAT) plans to conduct tenders for each phase, the first of which closed on 20 August 2019. Currently, the country has no operational large-scale floating PV capacity, making this an ambitious plan.

Although the country’s pipeline for floating solar plants is smaller than Thailand, Vietnam currently has the largest operational floating PV plant in the region with 39 MW of capacity, commissioned in May 2019. More projects are in the works across the region, with proposals being tendered in Indonesia and Singapore.