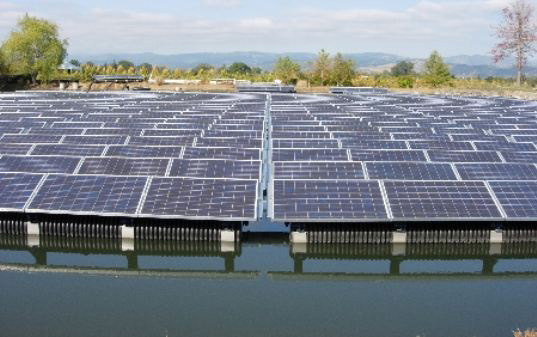 Acclaimed as an environmental crime, Balbina dam today merely generates electricity. Located near the equator line some 200 kilometers (125 miles) north of the Amazonian city of Manaus, the dam once deluged a section of the Amazon rainforest. Today, this huge artificial lake is been eyed conducive for a revolutionary floating solar panels project.

Built during Brazil’s 1964-1985 military regimes the artificial lake is claimed to be so vast that from the dam’s wall, the horizon barely comes into view.

Besides the alluring scenic beauty, the dam has saddened the expectations on generating electricity, currently produces a mere fifth of its maximum output of 250 megawatts.

Extending the successful technology of floating solar panels across the world, Sunlution has partnered with French firm Ciel et Terre to install the panels at Balbina.

“We’re going to transform the hydroelectric power generators, that have limitations due to the weather, into unlimited power producers because they will also use solar energy,” said Orestes Goncalves, president of Sunlution.

“This is one of the biggest environmental crimes that engineering has committed in this country,” said Energy and Mining Minister Eduardo Braga.

“How can we mitigate the cost of this crime? By improving the cost-benefit relationship of this power station,” Braga said at the ceremony inaugurating the use of the first floating solar panels.

This hybrid system uses the existing—and underutilized—power transmission infrastructure, as well as the flat water surface for the panels with no need to buy or expropriate new land.

The Balbina pilot project is expected to get completed by 2017 encompassing 50,000 square meters (540,000 square feet) of solar panels, expected as the size of five football fields.

The panels can produce five megawatts of electricity, enough to supply some 9,000 homes with power.

Engineers hope to increase the output to 300 megawatts, allowing Balbina to produce electricity for 540,000 homes.

The engineers have not said how much cheaper electricity could be for local residents, but one of the project’s long term goals is to bring down utility prices.