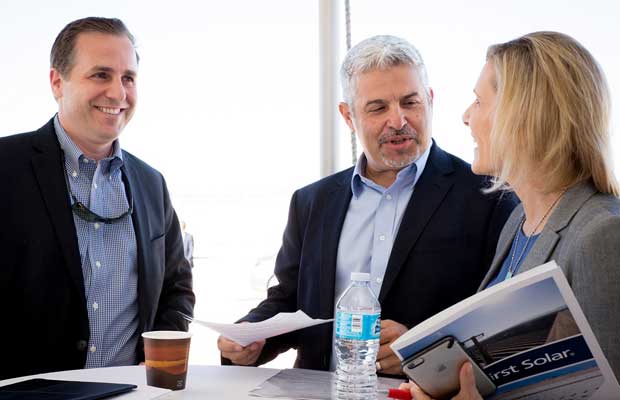 First Solar has announced that it has completed the sale of the cash equity interests in the 250MWac Moapa Southern Paiute Solar Power Project in Nevada to global private asset manager Capital Dynamics. Terms of the deal were not disclosed.

Minority tax equity interests in the project are shared by GE unit GE Energy Financial Services, and an affiliate of the Goldman Sachs Group.

Located on the Moapa River Indian Reservation approximately 30 miles north of Las Vegas, this facility is the first-ever utility-scale solar power plant to be built on tribal land, and has a long-term power purchase agreement (PPA) with LADWP to bring clean, renewable energy to Los Angeles residents. The solar power plant is capable of generating enough clean energy to power approximately 111,000 homes.

“This has been an exciting project to develop and build,” said Georges Antoun, First Solar’s Chief Commercial Officer. “Our technology is driving down the cost of solar electricity and enabling power providers to include competitive, reliable renewable energy in their portfolios. We are proud to transfer ownership of this power generation asset to Capital Dynamics.”

“The Moapa project is an important step in the Clean Energy and Infrastructure strategy of Capital Dynamics,” said John Breckenridge, Capital Dynamics’ Head of Clean Energy and Infrastructure. “We continue to be long-term owners of high quality power generation assets in North America and Europe. We are particularly pleased that with Moapa, we expand our strong relationship with First Solar.”

By using renewable energy from the sun, the Moapa Southern Paiute Solar Project will avoid approximately 341,000 metric tons per year of carbon dioxide emissions that would have been produced if the electricity had been generated using fossil fuels – the equivalent of taking nearly 73,000 cars off the road. First Solar’s technology creates no air or water pollution and uses no water to generate electricity.