Home » News » Fiji, Niger and Tuvalu deposited instrument of ratification of the Framework Agreement of the ISA

Fiji, Niger and Tuvalu deposited instrument of ratification of the Framework Agreement of the ISA

“ISA is a reflection of our common desire to significantly augment solar power generation in our countries, and make joint efforts towards technology development and mobilization of the required investment to promote energy security and universal energy access.” 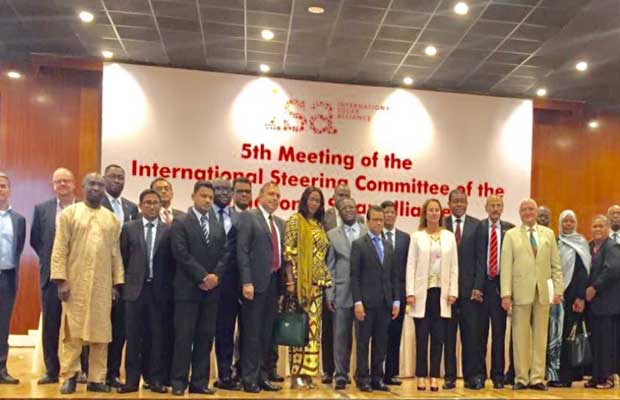 Fiji, Niger and Tuvalu deposited instrument of ratification of the Framework Agreement of the International Solar Alliance (ISA) in the 5th meeting of International Steering Committee (ISC) of the ISA held in National Capital. In this meeting representatives from 121 prospective member countries, who either completely or partially lie between the Tropic of Cancer and Tropic of Capricorn participated. The meeting was Chaired by Anand Kumar, Secretary, Ministry of New and Renewable Energy (MNRE) and Co-chaired by Ségoléné  Royale, Ambassador for Arctic and Antarctic Poles and Special Envoy for the Implementation  of the  International Solar Alliance, Government of France. Till date 40 countries have signed and 11 countries have ratified the Framework Agreement of the ISA. With ratifications by 15 countries, the ISA will become a treaty based inter-governmental international organization.

While welcoming the participants Anand Kumar, Secretary, MNRE and the Chair of ISC thanked the prospective ISA member countries for their continued support. He stated that the ISA is a reflection of our common desire to significantly augment solar power generation in our countries, and make joint efforts towards technology development and mobilization of the required investment to promote energy security and universal energy access. He   urged the prospective member countries of the ISA to expedite the ratification process.

Kumar informed that the second edition of the Renewable Energy Global Investors Meet & Expo, Re-Invest 2017 will be held from 7 to 9 December 2017. The venue of the three day Global meet, organized by MNRE will be the India Expo Centre, Greater Noida, National Capital Region of Delhi. Elaborating the details of Re-Invest 2017, Kumar said the aim of the event is to  develop partnerships  with  relevant stakeholders including international bilateral and multilateral financing institutions, equipment manufacturers, technology providers, developers, Public Sector Enterprises, Central and State governments, research institutions and academia. The Re-Invest 2017 will deliberate upon and evolve strategies for financing renewable energy and also showcase the Government of India’s commitment to the development and scaling up of renewable energy to meet the national energy requirement in a socially, economically and ecologically sustainable manner.

Kumar also stated that the Founding Conference of ISA and Solar Summit will also be held on the margins of RE-Invest 2017 on  8 & 9 December 2017. Hon’ble Prime Minister of India, His Excellency President of France and the Secretary General of United Nations are likely to grace the ISA Founding Conference.

The Co-Chair, Mrs Ségoléné Royale detailed the actions taken by her Government for supporting solar energy projects in ISA countries. She stated that concerted actions undertaken in the context of the Alliance should focus on realizing the objectives enshrined in the Paris Declaration, which included: bringing our efforts together to reduce the cost of finance for solar energy and mobilize up to US$ 1000 billion investments by 2030, and: developing new, cost efficient and reliable solar technologies and applications. On her suggestion the Committee agreed to include a programme on solar supported e-mobility.

Upendra Tripathy, interim Director General of the ISA informed about the progress in implementation of various activities under ISA. He specifically mentioned about the progress under the three programmes launched under the ISA “Affordable finance at scale”, “Scaling solar applications for agricultural use”, and “Scaling Solar Mini Grids”. He further informed about the ISA Secretariat’s initiative “ Common Risk Mitigating Mechanism (CRMM)” . The objective of the mechanism is de-risking and reducing the financial cost of solar projects in the ISA member countries. The instrument will help diversify and pool risks on mutual public resources and unlock significant investments. He informed that an international expert group has been working on the blue print of the mechanism and it will be rolled out by December 2018.

International Steering Committee was establishment under the mandate of the Paris Declaration of ISA to provide the guidance and direction to establish the ISA.  India has offered a contribution of Rs 175 crore for creating ISA corpus fund and for meeting the cost of ISA secretariat for initial five years.

The ISA is an Indian initiative jointly launched by the Prime Minister of India and the President of France on 30 November 2015 at Paris, on the sidelines of COP-21. It aims at addressing obstacles to deployment at scale of solar energy through better harmonization and aggregation of demand from solar rich countries lying fully or partially between the Tropic of Cancer and Tropic of Capricorn.