Sunlight comes in a spectrum, with each color having a different wavelength. Solar cells must absorb light of particular wavelengths, depending on how much energy the cell needs to drive the reaction. 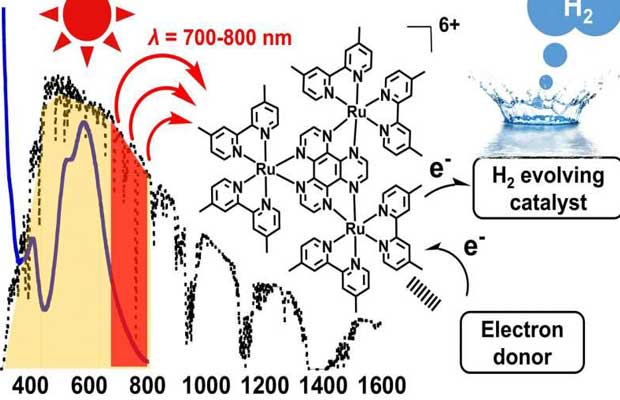 Hydrogen gas is a promising “green” fuel. The lightest chemical element, hydrogen is an efficient energy store and could potentially replace gasoline in vehicles. However, the element does not exist in large amounts in nature, and must be produced artificially.

Hydrogen can be produced by splitting water (H2O) into hydrogen (H2) and oxygen (O2). There are many ways to do this, but among the cleanest – hence most attractive – is using solar cells. These devices capture the energy of sunlight to drive the water-splitting reaction.

Sunlight comes in a spectrum, with each color having a different wavelength. Solar cells must absorb light of particular wavelengths, depending on how much energy the cell needs to drive the reaction.

The more of the spectrum it captures, the more hydrogen it produces. Unfortunately, most cells only absorb shorter wavelengths of light, corresponding to the higher energy region of visible light below the red light domain. This means that while colors such as blue and green light can be used, the rest is wasted.

Now, researchers at Kyushu University in Japan and its Institute for Carbon-Neutral Energy Research (I2CNER) have potentially solved this problem. They invented a device driven by near-infrared (NIR) light – the part of the spectrum, invisible to the naked eye, with wavelengths longer than visible red light.

Thus, they enabled a broader spectrum of light, including UV, visible, and NIR, to be harvested. Their design cleverly exploits the chemistry of ruthenium, a heavy metal related to iron. Their achievement was reported in Angewandte Chemie International Edition.

Particular metal-organic hybrid materials are good at capturing light, which helps their electrons to “jump” into orbitals in the organic parts of the materials attached to the metal center.

In solar cells, this is the first step in producing hydrogen, since electrons are the drivers of chemistry. However, the jump between orbitals is usually so big that only UV and the higher energy region of visible light have enough energy to stimulate it. Red, NIR, and even longer IR light are simply reflected back or pass through the devices, and their energy remains unused.

The Kyushu design is different. “We introduced new electron orbitals into the ruthenium atoms,” study corresponding author Professor Ken Sakai explains. “It’s like adding rungs to a ladder – now the electrons in ruthenium don’t have so far to jump, so they can use lower energies of light such as red and NIR. This nearly doubles the amount of sunlight photons we can harvest.”

The trick is to use an organic compound – hexagonal rings of carbon and nitrogen – to link three metal atoms into a single molecule. In fact, this not only creates these new “rungs” – hence the ability to use red and NIR light – but also makes the reaction more efficient due to spatial expansion of the light harvesting part of the molecule. Thus, the production of hydrogen is accelerated.

“It’s taken decades of efforts worldwide, but we’ve finally managed to drive water reduction to evolve H2 using NIR,” Sakai says. “We hope this is just the beginning – the more we understand the chemistry, the better we can design devices to make clean, hydrogen-based energy storage a commercial reality.”