Electric vehicles (EVs) and battery storage lead in the current and planned non-power generation technology in which senior business leaders from G20 countries have invested in or are committed to investing in, as said by an international law firm. 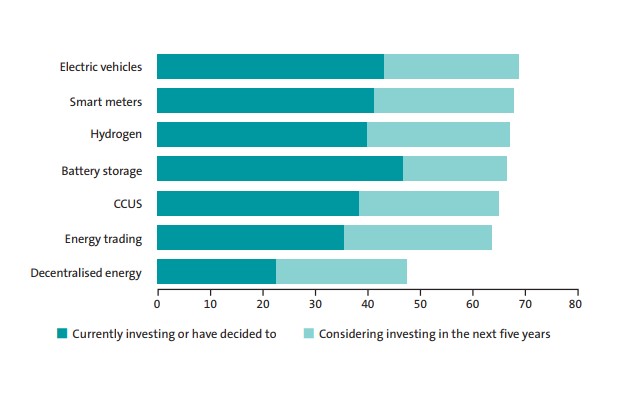 The law firm Ashurst in its new research report – Powering Change – Energy in Transition, analysed the views of over 2,000 senior business leaders from G20 countries, on the topic changing global energy market as it seeks to meet rising energy demand and a drive towards decarbonisation.

Thus as per the research findings, battery storage with 46 percent and EVs with 43 percent are the top non-power generation technologies in which most of the respondents from G20 nations have invested in or have committed to invest in.

Significantly, India will lead the charge among G20 countries with 66 percent of the Indian respondents confirmed their current or planned investments in EVs, while 51 percent of respondents from both Italy and Mexico came at the second position.

The reason being India leading the G20 charge is its rapid economic growth, strong industrial base and automotive manufacturing combine with an urban pollution crisis and progressive environmental policy agenda to accelerate low-carbon transportation, added the report.

Will India have greater success with manufacturing when it comes to energy storage?
Also Read

Commenting on the analysis, Antony Skinner, global co-head of power & utilities at Ashurst, said that “the effects of climate change can no longer be ignored. Addressing its impacts has become a priority for businesses, governments and individuals alike. As the energy transition takes place, with an increasing emphasis on cleaner and renewable technology, energy supply is under more scrutiny than ever before.”

Skinner further added that “some parties have a first-mover advantage while others are taking their first, tentative steps in their contribution to a carbon-neutral economy. With the onset of COVID-19 and the sharp reduction in oil prices, this is clearly a volatile and uncertain period for all markets, especially energy. However, the fundamentals of the market and prospects for the clean energy transition will likely remain largely unchanged in the longer term.”

The report also indicated that there is a significant correlation between the future of transport and energy storage, with batteries, hydrogen and EVs as all are potential investment areas that could play a critical role in decarbonising transportation.

Also, Smart meters with 41 percent and hydrogen with 40 percent remained on the 3rd and 4th positions respectively in most popular non-power generation technologies in which respondents said they are or plan to invest in. However, Saudi Arabia with 61 percent is leading the countries already investing in hydrogen with future investment led by China with 38 percent.

“New, clean technologies are already a key focus for the low-carbon transport industry. Hydrogen and batteries will play a central role in decarbonising transport and delivering a low-carbon future, further strengthening the business case for these technologies,” said Naomi Horton, Ashurst transport partner and sustainability champion.