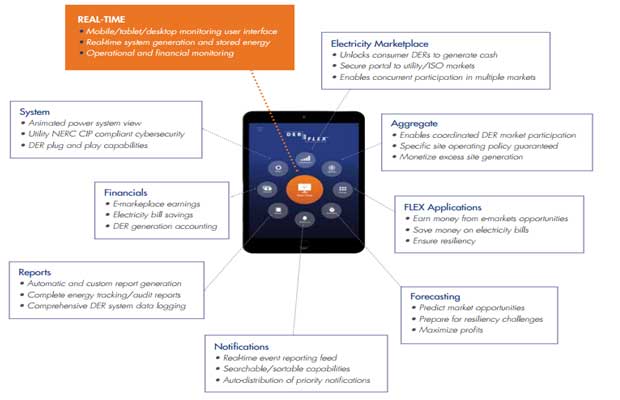 EnSync Energy’s DER Flex, while often deployed behind-the-meter, is a utility-grade platform designed for mission critical applications, and is SCADA and NERC CIP compatible which enables secure and reliable communication links to utilities and ISOs.

EnSync Energy has announced that  its new DER Flex software will be featured during the Maui Energy Conference on March 22nd and 23rd.

DER Flex, the new IOE software platform recently introduced by EnSync Energy, is showcasing its ability to aggregate distributed resources which in turn can be monetized for spot market sales of electricity and grid support services. During the event delegates will witness DER Flex aggregating and controlling EnSync Energy technology at commercial sites in real-time to fulfill power requests commonly initiated by a utility, ISO (independent system operator) or local grid provider.

The company in a statement said that its technologies eliminate the intermittency issues inherent to renewable energy generation and enable renewables to serve as controllable, on-demand assets. As Hawaii continues to increase the use of renewable power in its generation portfolio, DER Flex will facilitate the efficient and effective use of these resources to strengthen grid stability, as well as provide financial benefits and increased resiliency to behind-the-meter customers.

“Distributed energy resources, especially solar, are a large part of Hawaii’s electricity market. With ever-evolving policy changes, grid operators and behind-the-meter DER owners are increasingly looking for options that allow them to utilize existing infrastructure, while ensuring adaptability and revenue growth into the future,” said Jim Koeppe, DER Flex Product Manager at EnSync Energy Systems. “DER Flex is a deployed solution in Hawaii that delivers value to stakeholders on both sides of the meter.”

EnSync Energy’s DER Flex, while often deployed behind-the-meter, is a utility-grade platform designed for mission critical applications, and is SCADA and NERC CIP compatible which enables secure and reliable communication links to utilities and ISOs.

A live-feed of the aggregated sites, two operating in Hawaii and one on the mainland, will show via an intuitive dashboard the export of power to the electrical grid based on simulated grid power requests, real-time system monitoring of PV production, energy storage availability, and power flows.