This is Enerwhere’s second installation for Multiplex in the UAE. Enerwhere provides this solution on a lease basis, requiring no upfront investment by Multiplex. 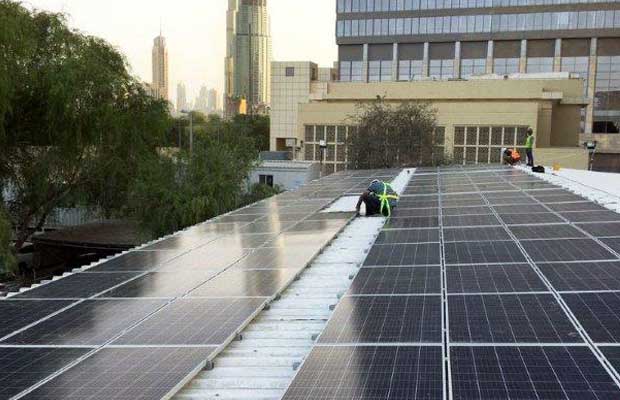 Enerwhere recently completed the installation of a solar hybrid generator system for Multiplex’ site offices at ICD Brookfield Place in the Dubai International Financial Centre. A first in the Middle East, the power system uses a combination of solar PV panels, batteries and generators running on biodiesel produced by Dubai-based Neutral Fuels. This is Enerwhere’s second installation for Multiplex in the UAE. Enerwhere provides this solution on a lease basis, requiring no upfront investment by Multiplex.

The site office uses power generated from 40 kWp of solar panels installed on the roof during daytime and switches to the site’s 100 kW / 200 kWh battery system at night. If there is not enough power available from solar and battery, the site’s diesel generators will run on biodiesel as a backup. The solar PV, battery and diesel generator systems are fully synchronized, so both can provide power at the same time when required. The hybrid system reduces the diesel fuel consumption and carbon footprint of the site by around 27%, saving over 800 tons of carbon every year, while reducing the cost and increasing the reliability of site operations.

Daniel Zywietz, CEO of Enerwhere, explained: “Most construction sites in the UAE are powered by diesel generators, which are the dirtiest and most expensive form of power generation. Additionally, with the high temperatures and humidity in the UAE, conventional engines sometimes break down. In a conventional system, this will result in a complete power outage, as the backup generator takes approximately 20 seconds to start. In an office full of computers this could be a major issue, as dozens of people will lose their work. Enerwhere’s new solar-battery-hybrid solution is cleaner and cheaper than conventional generators, and provides a much higher reliability. This supports Multiplex’s environment and sustainability agenda. There is no reason why every construction company in the UAE could not follow their lead.”

Stephen Smith, SHEQ Director of Multiplex, says “The decision to implement a solar hybrid system at the core of our operations has turned out to be a success. By converting to solar technologies, we are actively tapping into a resource that is abundant here in the UAE, enabling us to benefit from reductions in our carbon emissions alongside a reduced fuel bill at the end of the month. Multiplex began this journey in 2014, by initially using biofuels in our buses, since then we have proved that making stronger attempts to diversify towards green technologies across our site operations is a win-win situation.”

Karl Feilder, Chairman and CEO of The Neutral Group, said the company was proud to count Enerwhere & Multiplex amongst its customers.  “We always knew it would take time for big business to recognise the importance of very low carbon footprint fuel. Even today there are whole countries that don’t recognise it. We’ve had 5 years to hone our craft and our skills, and now even the trucks that deliver the waste oil to our Neutral Fuels biorefinery run on biodiesel, as does the truck that delivers biofuel to Enerwhere and Multiplex sites. It doesn’t get more environmentally friendly than that!”

The success of this project has allowed Enerwhere to begin rolling out this technology with Multiplex and other clients in the UAE. These construction companies can now all look forward to a cleaner more profitable future.