Energy Vault has announced that it has completed a USD 110 million Series B funding round led by the SoftBank Vision Fund. 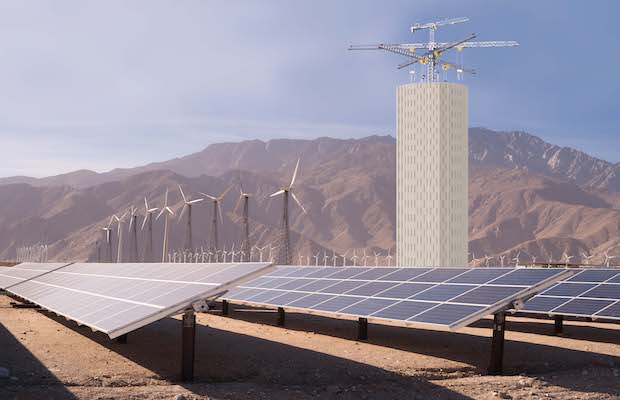 Energy Vault, the creator of renewable energy storage products that are transforming the world’s approach to long duration, utility-scale energy storage, has announced that it has completed a USD 110 million Series B funding round.

The investment for the round was made by SoftBank Vision Fund in its first investment in energy storage technology. Energy Vault will use the funds to accelerate the global deployment of its technology, which – for the first time – enables renewables to deliver base-load power for less than the cost of fossil fuels 24 hours a day. As part of the investment, Andreas Hansson, Partner for SoftBank Investment Advisers, will join the Energy Vault board of directors.

Renewables have struggled historically to fully replace fossil fuel power as a result of production unpredictability and intermittency from reliance on variable factors such as wind and sunlight. In the absence of more efficient and cost-effective storage, the amount of electricity that can be delivered to the grid from renewable energy sources, even though now widely affordable, has been limited.

“As we pursue our mission to enable renewable energy to replace fossil fuels 24 hours a day, we’re thrilled to partner with SoftBank Vision Fund as we expand our global presence,” said Robert Piconi, chief executive officer and co-founder, Energy Vault. “The Vision Fund shares our passion to combat climate change through innovation in energy storage technologies and, with its support as a strategic partner, Energy Vault is well positioned to meet the large and currently unmet demand for sustainable and economical energy storage worldwide.”

Energy Vault’s breakthrough technology was inspired by pumped hydro plants that rely on the power of gravity and the movement of water to store and discharge electricity. The company’s solution is based on the same well-understood fundamentals of physics and mechanical engineering used in those plants but replaces water with custom made composite bricks through innovative use of low-cost materials and material science.

The bricks, each weighing 35 metric tons, are combined with Energy Vault’s proprietary system design and machine vision software to operate a newly designed crane. The software autonomously orchestrates the energy storage tower and electricity charge/discharge utilising predictive intelligence and a unique stack of proprietary algorithms that account for a variety of factors, including energy supply and demand volatility, grid stability, weather elements and other variables. As a result, the Energy Vault tower can deliver all the benefits of a large scale pumped hydro storage system, but at a much lower levelised cost, higher roundtrip efficiency and without the requirement for specific land topography and negative environmental impacts.

Energy Vault has experienced significant growth since its launch in November 2018. In addition to the previously announced agreement with the Tata Power Company Limited, India’s largest integrated power company, Energy Vault will be demonstrating the first 35 MWh storage tower in the north of Italy in 2019.

“Energy Vault solves a long-standing and complex problem of how to store renewable energy at scale,” said Akshay Naheta, managing partner for SoftBank Investment Advisers. “The company’s integration of proven technologies with 21st-century material science and machine vision software provides a solution that reshapes the unit economics of renewable energy while being restorative to the environment. Energy Vault is highly complementary to SoftBank’s existing energy portfolio and we are pleased to further the company’s global development.”