Elon Musk responded to an ongoing power problem in the state of South Australia by committing to build a 100MW battery storage farm. That’s for one part; Musk promised that if he couldn’t provide the system within 100 days, he would give it to the state for free.

The Tesla CEO made promised on Twitter, replying to Atlassian CEO and Australian billionaire Mike Cannon-Brookes. The conversation came after similar remarks from Lyndon Rive, Tesla’s vice-president for energy products, who said earlier in the week that his company would commit to solving South Australia’s energy issues with 100 to 300 megawatt hours of battery storage. Like Musk, Rive said Tesla could install the required batteries within 100 days. “We don’t have 300MWh sitting there ready to go,” he said, “but I’ll make sure there are.” 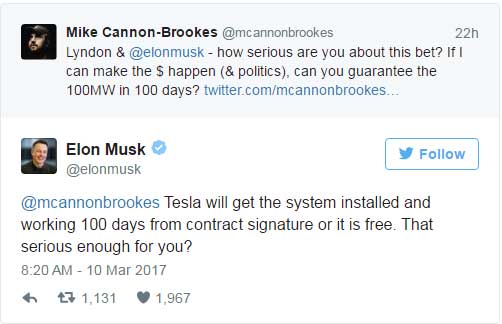 Musk replied Tesla would get the system installed and working within just 100 days of signing a contract. For his part, Cannon-Brookes requested seven days to “sort out politics and funding,” and asked the Tesla CEO to DM him an approximate quote for a 100MW battery farm — at “mates rates.” Musk replied a short time later specifying that Tesla would charge $250 per kilowatt hour for 100MWh systems like the one discussed, and that the company was moving to a fixed, open pricing structure for its battery farms.

Assuming Musk can indeed secure a deal with the Australian government, it seems that Tesla has the capabilities to make good on its founder’s promise: the company built a similar 80MW farm in California last year in just 90 days.

The Australian state has suffered from a spate of blackouts over the past six months, with the most recent taking place in early February, during a 104-degree heatwave. The Australian Energy Market Operator has blamed the blackouts on a number of factors, including higher-than-expected demand, but the topic has become a political battleground, with the Australian government pointing to the failure of renewable energies to cover usage.

Coal-fired power plants have been closing across Australia in recent months, hiking energy bills and contributing to blackouts like those suffered in South Australia. Prime Minister Malcolm Turnbull has pushed for a return to the fossil fuel as part of a “coal-fired future,” but Tesla’s battery technology may help wind, solar, and other renewable energy sources persist in Australia. Musk’s battery farms can store huge amounts of energy generated by these renewable sources and siphon it off during busy times, theoretically eliminating blackouts.