Electric to Dominate 3 Wheeler Market to 2030 In India- Report

According to the report, in India, E3Ws accounted for only about 1 percent of the 2.8 lakh electric vehicles (EVs) that availed purchase subsidies through Phase-1 of the FAME I scheme between April 2015-March 2019. It adds that Amazon is planning to add 10,000 electric rickshaws to its delivery fleet in India by 2025. Likewise, furnishing giant IKEA, and retail segments like Big Basket, Flipkart, and Grofers are among those increasingly relying on e-rickshaws for clean and economical last-mile delivery. 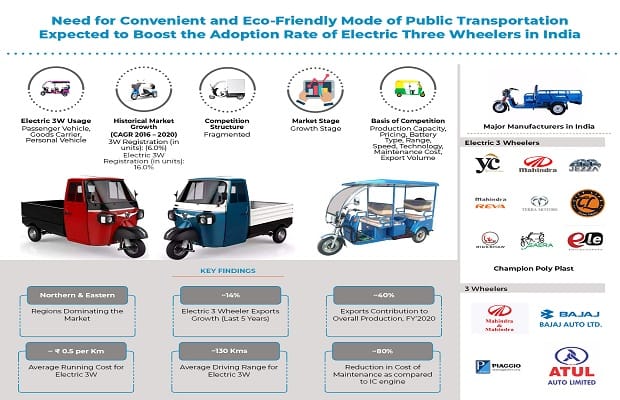 Interestingly, The report comprises various aspects including the E3W registrations, market segmentation by wheeler type, vehicle category, registration by region, and states. According to the report, the emerging trends in the E3W market depict that the government of India began allowing the sale of E3Ws without battery which significantly reduces purchase cost. The lightweight and compact nature of lithium-ion batteries, used in E3Ws, makes it well-suited for the battery swapping model. In this model, a discharged battery can be replaced immediately with a fully charged one. However, the upfront cost may be reduced by about 30-40 percent for E3Ws without battery, its operating cost will be relatively higher than E3Ws with battery. E3Ws with high assured utilization rates are a more profitable possibility for businesses, as they become cheaper to operate per km with increased utilization. This has been recognized by big companies in the Indian market.

The report also includes the overall competitive landscape and growth drivers and trends, and government role and regulations. To promote electric mobility, the government aims to support subsidies of about 5 lakh E3Ws in the country. Along with, focusing on creating electric charging infrastructure to promote usage. FAME II India Scheme is being implemented with total budgetary support of Rs.10,000 crores. For example, Delhi is paving the way for an E3W market by offering both financial and non-financial incentives such as an open permit system, targeted purchase subsidies, interest subvention on loans, hire purchase scheme, scrapping incentives along with no additional cost permit exchange system, etc. Also, Kerala’s state EV policy offers the proposal to give commercial permits only to E3Ws.

The report concludes with market projections for the future as it says, E3Ws will account for 65-75 percent of new three-wheeler (3W) sales by 2030. They are frequently being adopted by various courier companies for providing last-mile postal services and reducing carbon emissions at the same time.

However, the Covid-19 pandemic has been affecting the markets at a global level, it has been noticeably affecting India’s electric three-wheeler market as the production of vehicles has been hindered due to the lockdown. Industry experts expect the E3W market will recover faster when compared to their ICE counterparts and their outlook remains strong in the medium term. As per the EV market forecast by Frost and Sullivan, e-rickshaws, e-autos, and e-two wheelers are the most promising segments for electrification in India and are expected to account for over four million units by 2025.

Recently, the ‘Switch Delhi‘ campaign was launched by Delhi’s Chief Minister, Mr. Arvind Kejriwal for promoting electric vehicles in the city. Additionally, after the implementation of the Delhi EV policy in August 2020, three-wheelers have become the most common EV segment in the city for daily and short distanced commute.