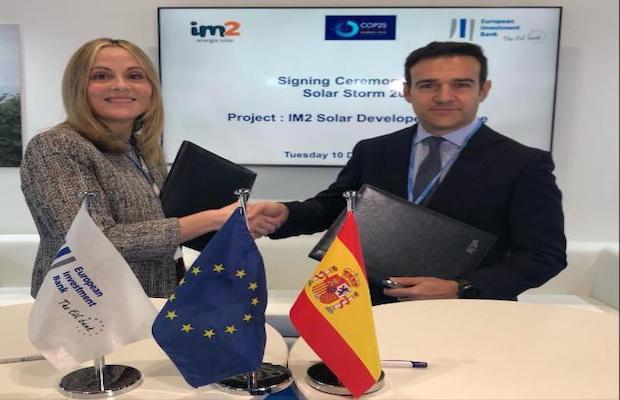 The European Investment Bank (EIB) has announced that it has signed an agreement with Spanish multinational IM2 Energía Solar to promote the development of renewable energy in Spain and help meet the EU’s climate objectives. The EIB is set to provide EUR 26 million to support the Solar Storm 200 project, which includes the construction of 15 solar photovoltaic power plants in Spain worth a combined 218 MW.

The agreement was signed today at the EU bank’s COP 25 stand by EIB Vice-President Emma Navarro and IM2 Energía Solar CEO Enrique Selva, and is supported by the European Fund for Strategic Investments (EFSI).

The 15 new solar power plants will have a total capacity of 218 MW and will be located in four autonomous communities: Extremadura, Andalusia, the Valencia Region and Murcia. Their installation will prevent the release of 116,000 tonnes of CO2 a year.

Emma Navarro said that “it is a pleasure to be at the Climate Change Conference supporting projects such as this that will help cut CO2 emissions and increase the amount of renewable energy generated in Spain. Our country has great potential for producing this kind of energy and the EIB wants to help take advantage of this. As the EU climate bank, the EIB is working to ensure that Europe leads the response to the climate emergency.”

The operation has an innovative structure that will see the EU bank investing in a platform for developing renewable energy projects for the first time. This agreement will make the EIB an equity partner of Solar Storm 200, the sustainable investment vehicle via which IM2 has planned the development and construction of this infrastructure in Spain.

IM2 Energía Solar CEO Enrique Selva said that the Spanish solar power sector is growing exponentially and Solar Storm is a major opportunity to invest in clean energy, in a project combining sustainability and long-term profitability.

“We have the opportunity to take advantage of Spain’s high levels of sunshine (the highest in Europe) and highly cost-effective technology to generate energy that can compete economically with other technologies.”

The agreement will enable Solar Storm to be launched as the investment platform of Umbrella Capital – IM2 Energía Solar’s holding company – with an Independent Power Producer (IPP) focus and becoming a renewable power producer. In addition to the EIB investment, Solar Storm 200 is backed by the commercial banking sector via project finance.