Two years since the signing of the Paris climate agreement and eight years after Copenhagen, countries on both sides of the rich-poor divide are falling short on promises made to address climate change through clean energy investment, research firm Bloomberg New Energy Finance (BNEF) finds. 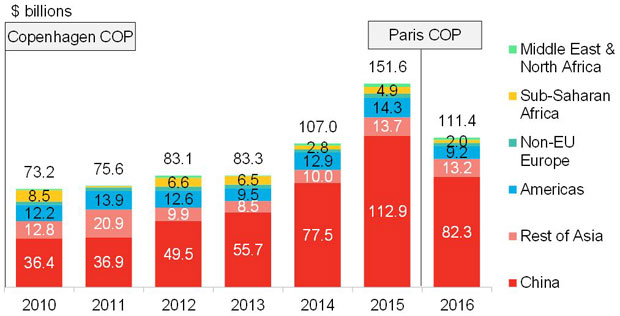 Beyond the drop seen 2015-2016, the longer-term trend is also potentially disconcerting for policy-makers. The number of non-OECD countries globally that have recorded clean energy asset finance of $100m or more per year  ̶  approximately the cost of one large onshore wind or solar PV power plant  ̶  has stagnated at around 27 since 2010.

At the historic United Nations Climate Change Conference held in Copenhagen in December 2009, the world’s wealthiest nations pledged to make $100 billion per year available to less developed nations to address the impacts of climate change. The figure was intended to include all forms of climate-related investment. Based on totals calculated by BNEF in Climatescope, there is little to suggest that clean energy finance will make a sufficient contribution to ensure the headline goal will be achieved. Funds specifically deployed from the world’s wealthiest OECD nations to the non-OECD countries to support clean energy build fell to $10 billion in 2016 from $13.5 billion in 2015, BNEF found. This figure is inclusive of both public finance (largely in the form of development bank and export-import institutions) and entirely private capital.

A swifter pace of clean energy scale-up will no doubt be required if the world is to avoid the worst impacts of climate change. BNEF estimates that a total of $8.7 trillion will be invested in zero-carbon emitting energy projects through 2040 under the firm’s long-term New Energy Outlook estimates. However, an additional $5.4 trillion will be needed to keep the total temperature rise at 2-degrees Celsius – and to keep the worst potential impacts of climate change in check.

In terms of the $100 billion per year promise, the UNFCCC Standing Committee estimates non-clean energy climate-related investment totaled $60.5 billion in 2014. Had BNEF’s “north-south” figure for clean energy flows for that year been included in that analysis, the total would have come to $71.3 billion. Given the $10 billion deployed from wealthier to less developed countries for clean energy in 2016, unless all other forms of climate-related investment have risen very sharply since 2014, the $100 billion goal appears far from reach with only three years to go until 2020.

Two years ago at the UN Climate Change Conference in Paris, nearly 200 countries pledged to address CO2 emissions through “nationally determined contributions”. While these promises varied in ambition and scope, virtually all required countries to undertake additional domestic policy-making to meet their internationally-stated goals. In that regard, the Climatescope survey suggests developing countries have substantial work to do. Of 71 nations researched in detail by BNEF, 76% have established domestic CO2 containment goals. However, only two thirds (67%) have introduced feed-in tariffs or auctions to support clean energy projects, and just 18% have set domestic greenhouse gas emissions reduction policies. These detailed, technical regulations have proven critical to attracting private capital in developing countries clean energy and facilitating scale-up.

“The figures highlight the gap between talk and action when it comes to addressing climate and supporting clean energy,” said Ethan Zindler of BNEF. “Wealthier countries have been slower to ramp investment than might have been expected, given the promises made eight years ago at Copenhagen. But poorer nations have in many cases not built the policy frameworks needed to build investor confidence and attract clean energy investment.”

The Copenhagen $100 billion pledge was reiterated in the 2015 Paris Agreement. In response, some developing countries pledged to meet emissions targets only on the condition that sufficient financial and technical assistance was provided. Twenty-five nations examined through Climatescope pledged to achieve more aggressive CO2 reduction goals if the wealthiest nations followed through entirely on the Copenhagen promise. Another 19 countries said they would cancel their commitments altogether if sufficient assistance was not provided. Brazil, for example, has committed to cut its harmful greenhouse gas emissions by 37% from 2005 levels by 2025 regardless of what support it receives from others. However, the country has also said it will cut emissions 43% with sufficient support from the international community.

Decarbonising the world’s power-generating sector was not the only intention of the original $100 billion per year pledge, but the power sector today accounts for around a third of greenhouse gas emissions in emerging markets. And total CO2 emissions from non-OECD countries skyrocketed 65% from 2002 through 2012 thanks to exceptional economic growth rates in China and other countries.  Looking ahead, supporting clean energy in developing countries is potentially crucial to addressing climate change as these nations are expected to see the fastest rates of economic and electricity demand growth.

The Paris Agreement brought 195 countries together to agree on the urgency of addressing climate change. The accord showed its resilience when world leaders collectively condemned plans by the U.S. to withdraw from the pact. Yet Paris can only be judged a success when its signatories follow through on their promises. For wealthier nations, this means fulfilling the promise first made at Copenhagen to provide financial assistance to lesser developed countries. For non-OECD nations, this means adopting detailed clean energy policy measures shown to build investor confidence.