INSPIRE 2017 is a global conference which aims to bring various stakeholders such as policy makers, innovators, financiers, influencers to showcase best practices in the sector. 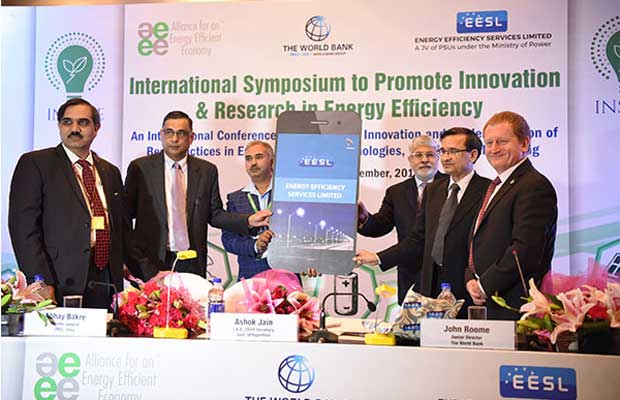 Energy Efficiency Services Limited (EESL) in alliance with the World Bank and Alliance for an Energy Efficient Economy (AEEE) organised the first edition of the International symposium to promote innovation & research in energy efficiency (INSPIRE 2017) in Jaipur.

INSPIRE 2017 is a global conference which aims to bring various stakeholders such as policy makers, innovators, financiers, influencers to showcase best practices in the sector. It is designed to provide global and national thought-leaders and implementers to expand perspectives on energy efficiency and spur ideas and solutions that will help leverage the full potential of energy efficiency and bring its multiple co-benefits to the fore.

Dr. John Roome, Senior Director of World Bank Group expressed concern on mitigating climate change and said, “India is the third largest energy consumer in the world. In India, the World Bank is proud to be partnering with EESL on a major $300 million programme, which is a long term low cost loan. This builds on our ongoing engagements with EESL and other agencies. The next five years will be critical for if we want a world that we would like our children to live in. And bold action on Energy Efficiency will be a key part of that action.”

EESL’s Managing Director, Saurabh Kumar, said that INSPIRE 2017 intends to create a platform for deliberations and sharing of best practices around energy efficiency policy solutions, high-impact research, innovative financing and implementation that are driving large scale market transformations in India and across the globe. The event has brought together over 350 participants from 13 countries across North America, Asia, Europe and Middle East.

Speaking at an event, Ashok Jain, Chief Secretary, Government of Rajasthan said, “Focused initiatives and commitments in green energy are evident in our times. Energy efficiency will be the key in mitigation of climate challenge. India’s unified action plan for climate change outlines many steps which simultaneously advance India’s development and climate change-related objectives.”

Rajasthan has large industries in cement and textile sectors. Under the PAT scheme, the designated industrial consumers were given targets, of which 58, in the first cycle, overachieved these targets. This demonstrates the due significance the State of Rajasthan gives to energy efficiency.