Dr. Harsh Vardhan, Union Minister for Science & Technology and Earth Sciences, has come up with a ‘Solar Power Tree’, which is an innovative way to generate electricity using solar power in a limited space. The Solar Power Tree has been engineered by the Central Mechanical Engineering Research Institute (CMERI), a laboratory of the Council for Scientific and Industrial Research (CSIR). 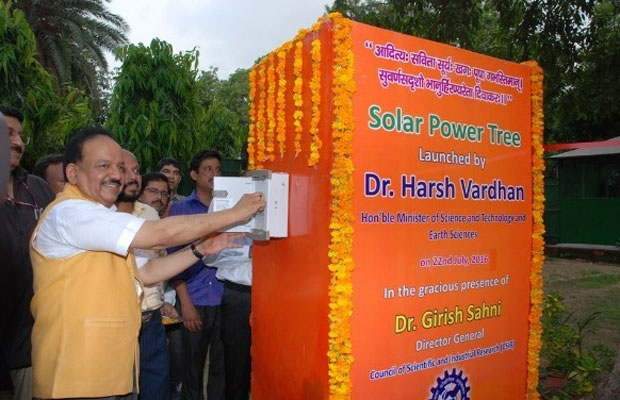 The Solar Power Tree model has been actually designed like a tree with branches made of steel that holds the photovoltaic panel.  It harnesses solar energy for producing electricity with an innovative vertical arrangement of solar cells, which in turn reduces the requirement of land as compared to conventional Solar Photovoltaic layout, while at the same time keeps the land character intact. This allows for utilizing the cultivable land for solar energy harnessing along with farming at the same time. The latest innovation to generate electricity is sure to find its viability both in urban and rural spaces.

Features of the Solar Power Tree 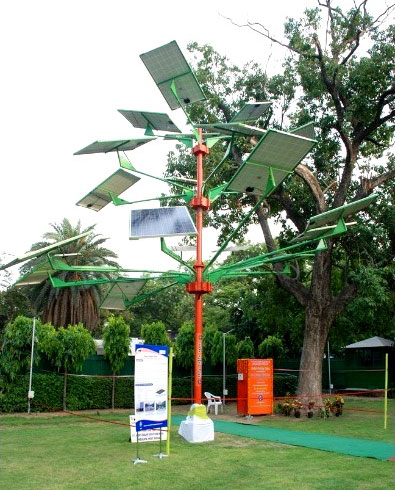 Union Minister for Science & Technology and Earth Sciences, Dr. Harsh Vardhan, appreciated that efforts of the scientists of the CSIR-CMERI to develop a solar power tree, stated that the innovation also addresses the challenge of increasing demand for Green Energy by gainfully utilizing scarce land resources in India.

Further speaking to PTI, Dr. Harsh Vardhan said that, ‘‘In order to produce 1 MW of solar power it requires about 3.5 acres of land in the conventional layout of solar panels. Thus, for any State in the country to survive on green energy, there will be requirement of thousands of acres of land.’’ He added, ‘’Acquisition of land is a major issue in itself.’’

Dr. Girish Sahni, DG, CSIR, who was also present on the occasion, said that ‘‘The solar tree has been functioning effectively at three places in West Bengal as a pilot project. As a future prospect, the tree would be developed in a rotatable module, which would have a motorized mechanism to align itself with the movement of the Sun during the day. Hence, it would be possible to harness 10-15% more power over and above the current capacity.’’

Moreover, Dr. Harsh Vardhan, also emphasized on the need for linkage and greater partnership with the stakeholders to make such indigenously developed technologies reach out to the masses.