Plans to construct a major 375MW solar and hybrid wind plant for Port Augusta in South Australia has been approved from the state government.

DP Energy, the Irish Project developer stated that the government’s green light meant it could now deliver one of the “largest and most significant” hybrid renewables projects in the Southern Hemisphere, including 59 wind turbines and almost 400 hectares of solar PV arrays. 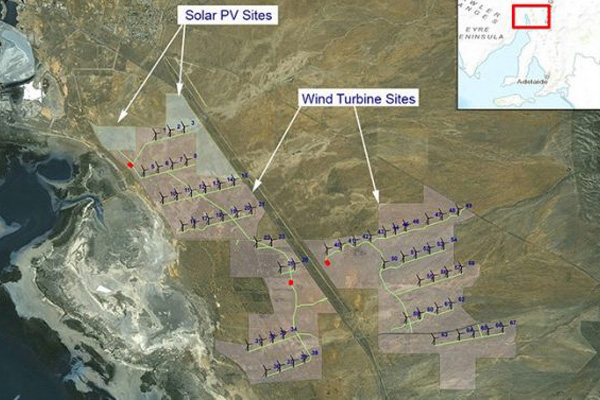 Publicly announced last year, Ireland’s DP Energy has been working on the project in 2010.  The project entered consultation phase in February 2016; before getting the nod from the South Australia’s State Government recently.

Once completed, the Port Augusta Renewable Energy Park will consist of around 1.6 million solar panels and 59 wind turbines, which together will boast a generation capacity of up to 375 MW, and is said to be one of the largest hybrid renewables projects in the Southern Hemisphere.

The plant will generate around 1000 gigawatt hours (GWh) of clean electricity annually, which will be enough to power approximately 200,000 households. It will avoid 470,000 tonnes of carbon dioxide emissions each year.

Moreover, the project is expected to create 250 jobs over the course of its development, peaking at around 600 jobs, and winding up with the creation of 15-20 ongoing jobs.

Construction of the plant is expected to commence in 2017 and last around two years. Once the project reaches the end of its predicted lifespan (25 years), the or existing equipment will be replaced with the latest technology or site will be decommissioned and returned to its former condition.