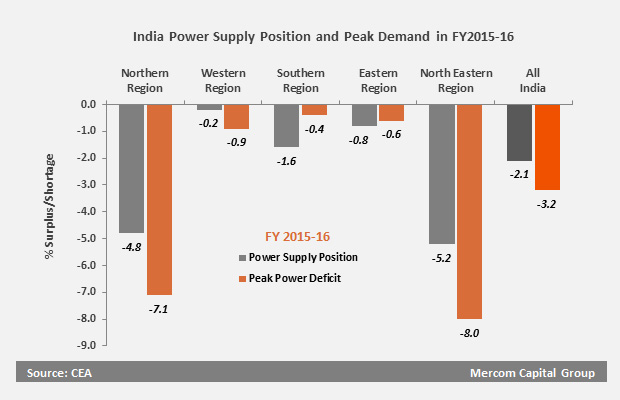 Mercom Capital Group in its latest report “India Solar Quarterly Market Update,” has revealed that power deficit numbers in India do not paint the full picture.

The report states that even if Central Electricity Authority’s (CEA) reports touts low power deficit and surplus situation, large populations in India are still living without electricity and power cuts are still part of daily life in urban areas and more so in rural areas.

The reduction in the power deficit is largely due to a combination of a drop in power demand in the commercial and industrial sector, and the financial health of DISCOMs says Mercom Capital in its report.

According to CEA, plant load factors have fallen by 20 to 30 percent due to the drop in power usage from commercial and industrial customers which are major source of revenue for DISCOMs.

Mercom Capital notes that DISCOMs are purchasing cheaper power from the exchanges, which is resulting in restriction issues for solar power. Some DISCOMs are simply turning to power cuts as they cannot afford to even purchase power at low rates on the exchanges says the report. Some states have surplus power but still don’t supply power 24/7 for fear of losses due to low tariffs from residential and agricultural customers.

The research firm states curtailment is still not widespread, but the issue needs to be addressed immediately before it starts to hurt investor sentiments in the sector. The problem is more pronounced in Tamil Nadu, especially in high wind energy density areas when wind and solar generation peak simultaneously. In Tamil Nadu curtailment is mostly due to the utility opting to buy cheaper power from the exchanges rather than paying Rs.7 /kWh for solar (the state has signed PPAs for that rate).

Grid congestion is due to a lack of transmission capacity and integration of intermittent energy sources is an issue, but the more challenging issue right now is the lack of power demand and the financial health of DISCOMs says the report.