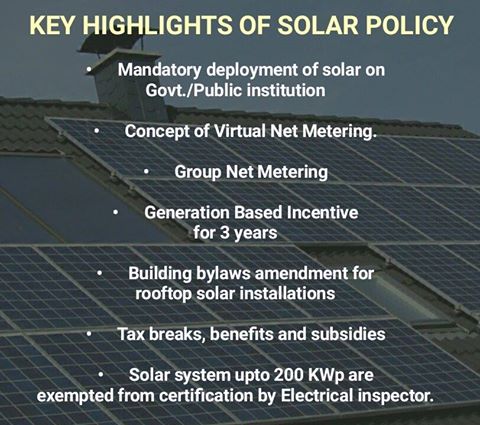 The Delhi Government on monday approved solar policy to make the national capital a solar city with installation of 1 GW solar power capacity in next five years(2020). The state government also proposed to double it to 2GW by 2025.

The policyoutlines a combination of regulations, mandates, incentives, and tax breaks for the growth of rooftop solar power in the capital was approved in a Delhi cabinet meeting chaired by Chief Minister Arvind Kejriwal.

CM, Arvind Kejriwal in a statement said “Making Delhi a solar city is one of our 70 agenda points. This policy, which is very progressive, will help in providing clean and green energy. Rooftop solar systems offer sustainable energy, environmental benefits, low gestation period and minimum transmission and distribution losses.”

The policy has been prepared by Government of Delhi in consultation with the Dialogue and Development Commission after extensive consultations with local and international experts.

The policy encourages net-metering for solar plants above 1 kW based on the net-metering regulations already issued by the Delhi Electricity Regulatory Commission. It also makes the deployment of solar plants mandatory on all government-owned rooftops in the next five years and requires Discoms to meet at least 75 percent of their solar renewable purchase obligation (RPO) within Delhi.

Delhi’s Minister of Power, Satyendar Jain said solar power is the most viable form of green energy in Delhi. It has the potential of lowering the state’s expenditure on energy through peak shaving, strengthening its energy security, and reducing its reliance on unsustainable fossil fuels. It will also reduce the burden on the existing transmission & distribution system hence less expenditure will be required on their maintenance.

The policy supports all models of ownership and maintenance of solar plants, including self-owned (“CAPEX”) and third-party-owned models (“RESCO”) stated the state government in a statement.