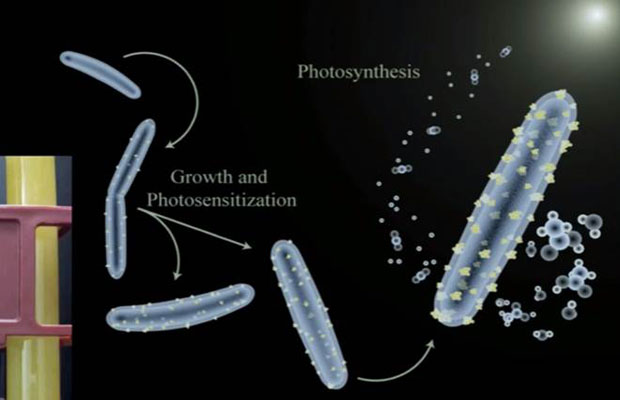 To enable humans to capture more of the Sun’s energy than natural photosynthesis can, scientists have taught bacteria to cover themselves in tiny, highly efficient solar panels to produce useful compounds.

Scientists have created cyborg bacteria – microbes covered with tiny, highly efficient solar panels – that are better than plants at harvesting the Sun’s energy to produce fuel from carbon dioxide and water.

Photosynthesis provides energy for the vast majority of life on Earth. However, chlorophyll, the green pigment that plants use to harvest sunlight, is relatively inefficient.

To enable humans to capture more of the Sun’s energy than natural photosynthesis can, scientists have taught bacteria to cover themselves in tiny, highly efficient solar panels to produce useful compounds.

“Rather than rely on inefficient chlorophyll to harvest sunlight, I have taught bacteria how to grow and cover their bodies with tiny semiconductor nanocrystals,” said Kelsey K Sakimoto, from University of California, Berkeley in the US.

“These nanocrystals are much more efficient than chlorophyll and can be grown at a fraction of the cost of manufactured solar panels,” said Sakimoto.

Humans increasingly are looking to find alternatives to fossil fuels as sources of energy and feedstocks for chemical production.

Progress has been made, but the systems are not efficient enough for commercial production of fuels and feedstocks.

The new research focuses on harnessing inorganic semiconductors that can capture sunlight to organisms such as bacteria that can then use the energy to produce useful chemicals from carbon dioxide and water.

The scientists worked with a naturally occurring, nonphotosynthetic bacterium, Moorella thermoacetica, which, as part of its normal respiration, produces acetic acid from carbon dioxide (CO2).

Acetic acid is a versatile chemical that can be readily upgraded to a number of fuels, polymers, pharmaceuticals and commodity chemicals through complementary, genetically engineered bacteria.

Researchers fed cadmium and the amino acid cysteine, which contains a sulfur atom, to the bacteria, they synthesized cadmium sulfide (CdS) nanoparticles, which function as solar panels on their surfaces.

“Once covered with these tiny solar panels, the bacteria can synthesize food, fuels and plastics, all using solar energy,” Sakimoto said.

The bacteria operate at an efficiency of more than 80 per cent, and the process is self-replicating and self- regenerating, making this a zero-waste technology.

“Synthetic biology and the ability to expand the product scope of CO2 reduction will be crucial to poising this technology as a replacement, or one of many replacements, for the petrochemical industry,” said Sakimoto.