CSIR-CMERI and their record-breaking solar trees need a pause

Earlier this month on March 14th, the Council of Scientific and Industrial Research’s Central Mechanical Engineering Research Institute (CSIR-CMERI) unveiled the world’s largest solar tree, officially certified by the Guinness World Records (GWR), which has been installed at its Centre of Excellence for Farm Machinery in Ludhiana, Punjab. Rated for a capacity of 53.6 kW, the solar tree comes with an on-grid inverter of 50 kW and has been built at a cost of Rs 41.6 lakhs.

Intended to bring visibility to solar technology, solar trees are a bit like art installations that enhance the surrounding landscape as well as increase awareness about solar energy. Additionally, in land-scarce areas, solar trees complement rooftop solar systems and other green building measures by occupying little installation space. The working of a solar tree is much like that of a real one—leaf-like solar panels connected through metal branches using sunlight to make energy. 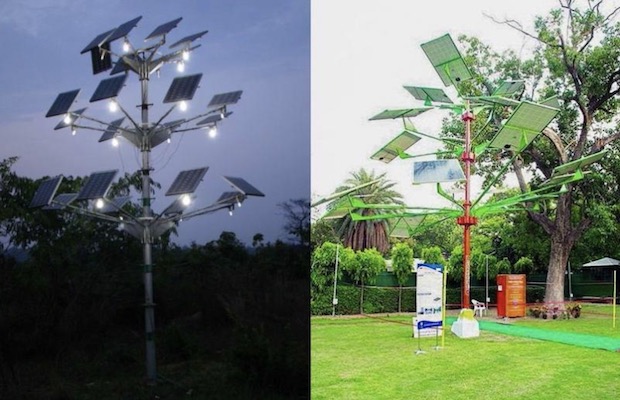 This is not the first time CSIR-CMERI has built a solar tree or broken its own record of building the largest one in the world. In 2016, the institute designed India’s first and the world’s then largest solar power tree and set it up in its Residential Colony in Durgapur, West Bengal. The solar tree was inaugurated by Mr. Harsh Vardhan, who was the Science and Technology minister at the time.

The tree was built on 4 sq. ft of land, and produced 3 kW of energy, claimed to be enough to power 5 households. Developed under the leadership of S N Maity, Chief Scientist at CMERI, the system was built at a cost of around Rs.3 lakh with battery back-up.

“The tree charges a battery backup system that can provide two hours of light after sunset on a full charge. The solar tree is also self-cleaning, with a built-in water sprinkler to clear any debris that would interfere with efficiency,” the institute said at the time.

“1kWh tree can also be manufactured to suit the residential needs and it will cost around Rs.85,000/- only. It will also benefit commercial enterprises, while the distribution company’s charge Rs.9 per unit, solar power could be produced @ Rs.3.5 per unit and excess power can be exported to the grid which can also help in earning revenues,” NRDC had claimed.

In 2021, CSIR-CMERI developed the world’s largest solar tree, again, which was installed at its Residential Colony, in Durgapur, West Bengal, again. “The installed capacity of the solar tree is above 11.5 kWp. It can generate 12,000-14,000 units of clean and green power annually,” said Harish Hirani, director of CSIR-CMERI. The tree ensures minimum shadow area and can power agricultural equipments like high capacity pumps, e-tractors and e-Power tillers, said the institute.

While CSIR-CMERI’s contribution, including the latest one in Punjab, towards the development of the largest solar trees across the world is indeed notable, it betrays the fact that the premier institute directing its energies towards an effort that by now is quite predictable with little original research or development involved. Even the cost reductions on a per Kw basis that have been managed owe more to the secular drop in panel prices than anything else. The structural costs in solar trees, the key additional cost that makes them distinct, are also the biggest reason why they have not caught on with the rest of the world yet, especially with metal prices seemingly set to remain elevated for the foreseeable future. Thus, besides the higher need for subsidy support, many would also question how prudent it is to encourage farmers to rely on a delicate and costly single source of power — the solar tree — to fulfil all their energy needs for activities agricultural and otherwise? It’s worth noting that with higher capacity and larger sizes, maintainance costs also enter the picture, and at Rs 0.61 per unit per month in the largest case, add a sizeable component to these projects.

In fact, a very cruel but not wholly unfair insinuation could be that a solar tree is nothing more than a larger version of a solar streetlight.

In their defence, it must be highlighted that the institute did showcase two other products developed by its researchers and partners, namely, a Biomass Insulation Cold Storage, and an Islanded Solar Powered BioDiesel Mini Grid of 50 kW for distributed energy.  Both these projects are relevant, and seem well worth pursuing, considering their relevance to local conditions. As was the demo project where the CSIR-CMERI’s own kitchens were powered by a DC solar plant at Ludhiana, with stoves developed by their researchers. These stoves have already been licensed out to manufacturers for a wider market reach.

Finally, with a bit of history behind its efforts now, are the solar trees developed by CSIR-CMERI since the year 2016 currently functional or defunct? Have they delivered on the claims made at the time of their installation and unveiling? We reached out to the institute for clarity on the same but did not receive a response.