CS Energy, a leading integrated energy firm that designs and builds optimized projects in the solar, storage, and emerging energy industries, in close partnership with the Goldman Sachs Renewable Power Group (GSRP) and the New York State Energy Research and Development Authority (NYSERDA), successfully developed and initiated construction on 216 megawatts-dc (MWdc) of new utility-scale solar projects across New York. The projects are expected to achieve commercial operations by the end of 2021, making them the first operational utility-scale solar projects in upstate New York. 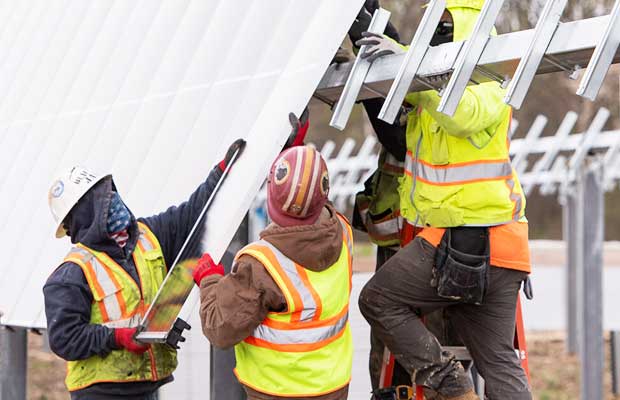 The portfolio consists of the following geographically diverse mix of projects:

* Stillwater Solar was developed by East Light Partners, acquired by GSRP, and is being constructed by CS Energy.

In 2016, under the direction of Governor Andrew Cuomo, New York’s Public Service Commission established the Clean Energy Standard, which has been further bolstered by 2019’s Climate Leadership and Community Protection Act,  committing that 70 percent of the electricity consumed in New York would be generated by renewable energy sources by 2030. The eight solar projects, developed in close coordination with the local community and regional stakeholders, were awarded contracts by NYSERDA as part of its Renewable Energy Standard Request for Proposals in 2017 and 2018.

Generating over 500 construction jobs, the solar portfolio will further support the jobs segment of renewable energy installers—already recognized as being among the fastest growing job segments in New York. Beyond jobs, the projects represent over $160 million of private investment and are expected to generate over $80 million in benefits into local communities and regions. These benefits accrue to local landowners, property tax jurisdictions, as well as the local contractors who will provide ongoing operations and maintenance support for the projects.

“CS Energy is proud to continue to support New York as it achieves its ambitious clean energy goals,” said Eric Millard, Chief Commercial Officer of CS Energy. “As the leading solar company in the state, we are proud to be leading upstate New York’s first utility-scale solar projects in close collaboration with local communities. Furthermore, we’re pleased to have partnered with the fantastic teams at Goldman Sachs Renewable Power, NYSERDA, and National Grid, all of whom have made significant contributions towards the success of these projects.”

This portfolio represents a significant step toward CS Energy’s goal of being the preeminent solar company in New York State. To date, CS Energy has built over 150 MWdc of solar projects in New York, and by the end of 2021 that number will be close to 500 MWdc. CS Energy recently opened a regional headquarters in Albany to further support the company’s growth. It currently employs more than 45 full time project management and engineering staff in New York and supports a robust network of construction labor, local suppliers and subcontractors. CS Energy has already been recognized for its leading role in the state’s renewable energy industry and was recently named the #1 solar contractor in New York by Solar Power World in its annual ranking of top solar companies nationwide.

CS Energy chose to partner with the Goldman Sachs Renewable Power Group to provide the financing and asset management services required to successfully construct, own and operate the projects. Goldman Sachs Renewable Power Group is deeply committed to renewable energy, and currently owns and operates more than 2.3 GW of clean power across the country.