In Q1 2020, the wind sector saw a 19 percent drop in installations against the same period in 2019, mainly due to supply disruptions caused by COVID-19

Support schemes for the wind sector must be extended to prevent a prolonged slowdown in installations, according to a new analysis by Rethink Technology Research. In a quarterly tracking service for Q1 2020, the sector saw a 19 percent drop in installations against the same period in 2019, despite the fact that lockdown measures for COVID-19 weren’t implemented in many of the major markets until March. 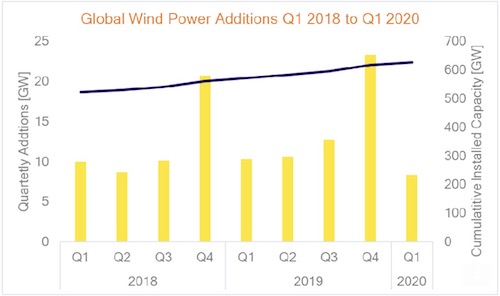 In the report entitled Covid-19 flattens Q1 2020 wind additions in major markets, a disruption in China’s domestic installations (down 47 percent) and in its supply chain exports has meant that early ripples have been felt on a global scale, which will inevitably propagate through the rest of 2020. While some markets have extended subsidy schemes, project deadlines and auctions, other regions that are more resistant to doing so, risk a significant volume of capacity that could quite easily fall by the wayside.

As per the report, Quarter One (Q1), in any year, usually shows a dip in installations, following a rush for completion ahead of end-of-year deadlines. But with global supply chains disrupted earlier in the quarter, from China especially, this has been more marked than in previous years. Compared to Q4 2019, Q1 2020 saw a 64 percent drop in global installations; it was even 19 percent lower than the same quarter in 2019, falling from 10.3 GW to 8.3 GW.

This addition brought global wind power capacity to 627 GW, with 599.5 GW coming from onshore turbines and the remaining 27.2 GW offshore. Quarterly additions from the offshore sector represented just over 5 percent of new installations. As the epicenter for the virus, China lost its long-held place as the leader for quarterly wind additions, with the US installing a marginally greater capacity of 2,481 MW (China installed 2,460 MW), as lockdown measures were not implemented at scale until Q2 in America.

However, with much of the world’s supply chain for wind power being dependent on China, and with lockdown measures closing down factories across Europe in March, Germany was one of the only European players not to show a large drop in installations. The 562 MW it installed doesn’t go far towards saying that the country is over its problem of NIMBYism, adds the report. It goes further in highlighting the poor performance of other European additions.

The report further adds that with the global economic impact of COVID-19 materialising most acutely beyond the end of Q1, it is likely that Q2 will show an even larger downturn in activity before the sector bounces back. It’s possible that revenues for renewables plants could fall by over 30 percent through 2020 and 2021, with major markets which use day-ahead power prices likely to be the first to fall into this category.