Corporations bought a record amount of clean energy through PPAs in 2019, up more than 40 percent from the previous year’s record.

Corporations bought a record amount of clean energy through power purchase agreements, or PPAs, in 2019, up more than 40 percent from the previous year’s record. The majority of this purchasing occurred in the United States, but also underpinning the strong uptrend is a surge in corporate sustainability commitments around the world.

Put in context, the 2019 total was equivalent to more than 10 percent of all the renewable energy capacity added globally last year – and the projects involved are likely to cost between USD 20 billion and USD 30 billion to develop and build.

Technology companies once again dominated clean energy procurement. Google signed contracts to purchase over 2.7 GW of clean energy globally in 2019, more than any other corporation. In September 2019, the tech giant announced contracts to purchase 1.9 GW of clean energy in six countries – the largest single announcement ever by a corporation. The company used a unique reverse auction process to sign these contracts, with developers taking part in a live, public bidding process. Facebook (1.1 GW), Amazon (0.9 GW) and Microsoft (0.8 GW) were the next largest buyers globally in 2019.

Kyle Harrison, a sustainability analyst at BNEF and the lead author of the report, said “the clean energy portfolios of some of the largest corporate buyers rival those of the world’s biggest utilities. These companies are facing mounting pressure from investors to decarbonise – clean energy contracts serve as a way to diversify energy spend and reduce susceptibility to the tangible risks associated with climate change.” 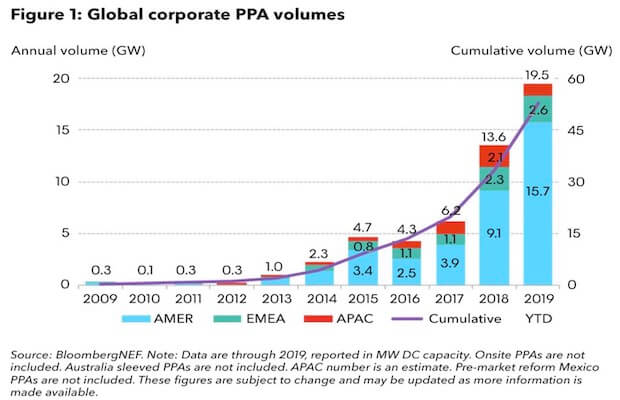 PPAs in the Americas region totalled an unprecedented 15.7 GW last year. The US, made up the bulk of this, at 13.6 GW – more than all of the global activity in 2018. More than 80 percent of these contracts signed in the US in 2019, or 11.2 GW, were under the virtual PPA model – synthetic contracts that can only be signed in deregulated markets. The remaining 2.4 GW of clean energy was transacted under green tariffs, which are offered by utilities in regulated markets.

It was also a record year for corporate PPAs in Europe, Middle East and Africa (EMEA) and Latin America, where companies purchased 2.6 GW and 2 GW of clean energy, respectively. In Latin America, which saw threefold growth in its corporate PPA market, Brazil and Chile have emerged as top markets.