HeraGlaze acts as a barrier and prevents thermally-induced impurities, such as iron, from transferring from the crucible to the silicon ingot. 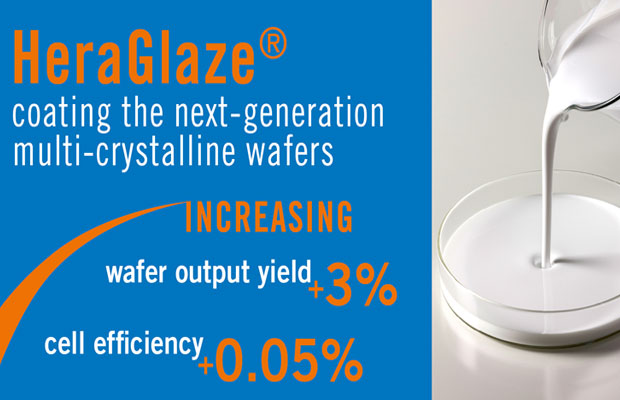 Heraeus Photovoltaics, the worldwide leading supplier of metallization solutions to the PV industry, today announced a comprehensive cooperation agreement with Rietech Solar, a China-based manufacturer of silicon wafers for solar cells. Under the agreement, Rietech Solar will upgrade its manufacturing process to use HeraGlaze, the new high-purity SiO2 diffusion barrier coating from Heraeus, for mass production of it multi-crystalline wafers. For Heraeus, the agreement represents a major step to expand its presence upstream in the solar photovoltaic value chain.

Developed in 2017, HeraGlaze represents a breakthrough innovation the very first step of the of the solar cell manufacturing process, when polycrystalline silicon blocks are melted into a single silicon ingot. To deliver the highest quality of the ingot and the eventual end product, the solar wafer, HeraGlaze is applied as a slurry on the porous surface of the crucibles. HeraGlaze acts as a barrier and prevents thermally-induced impurities, such as iron, from transferring from the crucible to the silicon ingot during the melting and crystallization of silicon.

By increasing the usable section of the silicon ingot, Heraeus will be able to increase Rietech’s wafer output yield by 3% and its customers’ cell efficiency by 0.05%. This will enable Rietech’s multi-crystalline wafers to defend its market share against aggressive price competition from mono-crystalline wafers. In less than a year, the HeraGlaze coating has gone from the research lab to the real world to produce impressive results for wafer manufacturers, including:

Additionally, Heraeus Photovoltaics will work with Rietech on advanced research and development programs to produce the next generation of high-efficient wafers based on the HeraGlaze technology. Dr. Weiming Zhang, EVP and CTO of Heraeus Photovoltaics, said, “Rietech and Heraeus both share the belief that advancing the adoption of solar energy cannot occur in isolation, which is why we are committed to working together. HeraGlaze can be a game-changer for Rietech’s wafer manufacturing process and will help them consolidate their leadership in ‘full-melt’ process for manufacturing multi-crystalline wafers.”

Heraeus Photovoltaic’s Global Business Unit, is an industry leading developer and manufacturer of silver metallization pastes for the photovoltaic industry for over 40 years.