The entire power generated from the solar plant would be supplied to TANGEDCO, at a preferential tariff of Rs. 5.10 per unit for 25 years, a press release stated. 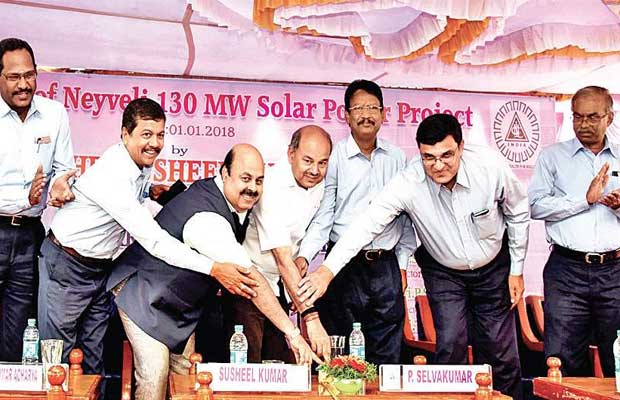 The entire power generated from the solar plant would be supplied to TANGEDCO, at a preferential tariff of Rs. 5.10 per unit for 25 years, a press release stated.

Speaking at the function, Susheel Kumar said that that NLCIL delivered its share in renewable energy sector in line with the nation’s agenda of 175 Gigawatts renewable energy generation as per the promises made in the Paris climate change agreement for rapid scaling up wind and solar power to 36 per cent of the global energy mix by 2030.

With the commissioning of 130MW, NLC’s solar power capacity has gone up to 140MW while the state’s to 1,995MW. Nearly 2,000MW solar projects are in the pipeline.

The project is spread over four different locations within Neyveli. The power evacuated from each site is linked to the pooling sub-station which has been established at a cost of Rs 38.10cr by GE T&D Ltd.

“The total project cost works out to Rs 752.62cr. This green power initiative is likely to reduce the loading of about 2.16 lakh tonnes of carbon dioxide in the atmosphere compared to the fossil fuel,” said Susheel Kumar.