Inaugurating a 1230 kW solar power plant in Gorakhpur, Chief Minister Yogi Adityanath said it would give impetus to the green energy drive of Prime Minister Narendra Modi and would not only help in lighting up many houses but also conserve environment. 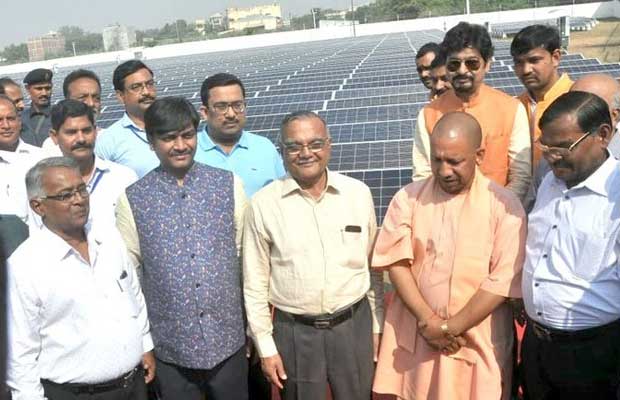 The solar power plant has been constructed at a cost of Rs 6 crore.

The CM said that the state was facing natural calamities because of exploitation of environment. “We have better natural resources and we should use them judiciously,” he said. “For at least 10 months, Uttar Pradesh gets quality sunlight and it should be used for green energy,” he said, adding that solar energy can have dual effect, one, protect environment from pollution caused by diesel and petrol engines and, two, save precious foreign reserve.

“By using better technology, the cost of production of solar energy can be reduced to Rs 2.50 per unit. The government has proposed a new solar policy under which industrialist can set up units anywhere in the state and through Open Excess system, sell and purchase power at any place. The days are not far when the state will start using non-conventional energy instead of fossil fuel,” the CM said.

Yogi said the government had given a go ahead to set up ethanol plant in Gorakhpur for which a memorandum of understanding had been signed with Indian Oil Corporation (IOC).

Around 50 acres of land had been acquired in Dhuriapaar for the project, which is estimated to cost Rs 1200 crore and will benefit local people, he said.

The CM also appealed to the investors to invest in eastern UP as this region was bestowed with natural resources which had so far remained unharnessed.