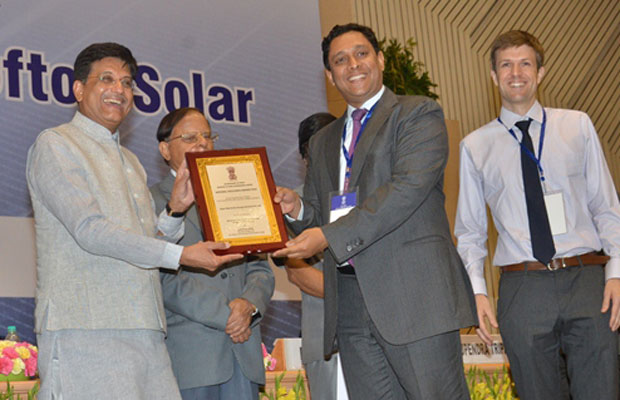 CleanMax Solar has been honored twice in the ‘Developer’ and ‘EPC’ categories by the Ministry of New and Renewable Energy (MNRE) for excellence in the rooftop solar industry.

The National Excellence Awards 2016′ were bestowed at the ‘National Workshop on Roof Top Solar Power’ organized by MNRE at Vigyan Bhavan.

Jain had also been invited, as the only representative from the private sector, to share his perspective and recommendations to the government on achieving its ambitious goals for rooftop solar in the country.

With more than 50 commissioned rooftop solar plants across India totaling more than 30 MW, CleanMax supplies solar power to leading corporates across the country.

Kuldeep Jain, MD, CleanMax Solar shared his thoughts on the achievement, “We are delighted and honored with the recognition bestowed upon us, recognizing our leading role in the industry. During the past few years, CleanMax Solar has been working with the country’s leading corporate and MNCs to help them achieve their sustainability goals in a cost-saving, capex-free, and hassle-free manner. Our growth and success in this segment so far is a testament to the enormous potential for rooftop solar in the country.”