Home » News » China, Europe Will Lead World To Record-breaking RE Capacity In 2022

China, Europe Will Lead World To Record-breaking RE Capacity In 2022

The global capacity additions are expected to rise this year to 320 GW.

The International Energy Agency (IEA) said today (May 11) that China and Europe would lead the world to set a new record in renewable energy capacity in 2022 after which the momentum could drop in the following year. The findings come from IEA’s Renewable Energy Market Update for May, 2022.

A press release issued by IEA read, “the global capacity additions are expected to rise this year to 320 gigawatts – equivalent to an amount that would come close to meeting the entire electricity demand of Germany or matching the European Union’s total electricity generation from natural gas. Solar PV is on course to account for 60% of global renewable power growth in 2022, followed by wind and hydropower.” Other estimates have also consistently solar capacity this year at over 200 GW.

The European Union has commissioned enough capacity of renewable in 2022 and 2023 to significantly reduce its dependence on Russia for supply of gas to keep its hearth warm. Charting the growth this year, IEA has counted on China, EU and Latin America to clock much faster growth than initially expected and compensate for slower than anticipated growth in the United States, clouded by uncertainty over imports from China.

Unless some earth shattering policy tweak is introduced, renewable power’s global growth is set to lose momentum in 2023 largely because of a 40% decline in hydropower expansion and little change in wind additions, read the IEA press release.

The agency has sounded quite bullish on solar PV capacity staying its on course to break new global records in both 2022 and 2023, with the annual market reaching 200 GW in 2023. Solar’s growth in China and India is accelerating, driven by strong policy support for large-scale projects. The rooftop solar installations by households and companies are expected to help consumers in EU save money as electricity bills rise. 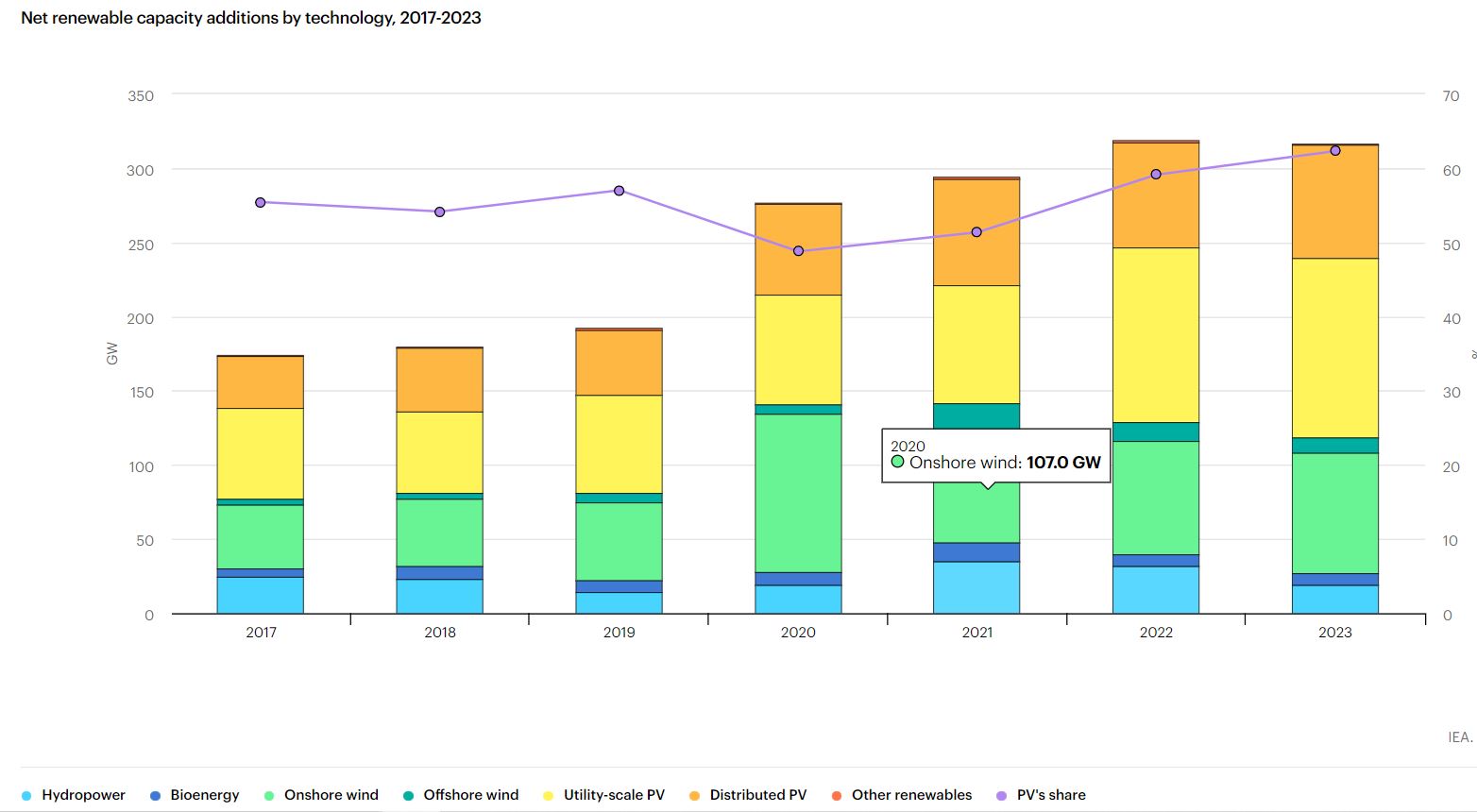 Even as wind energy has a huge potential to emerge as the last word on sustainability, the policy makers across the world are doing the cause more harm than good by formulating long and complex regulations. Clocking exceptionally high installations in 2020, the figure plunged by 32% in 2021 but promises a recovery this year and next following the additions of new onshore wind capacity. New additions of offshore wind capacity are set to drop 40% globally in 2022 after having been buoyed last year by a huge jump in China as developers rushed to meet a subsidy deadline. But global additions are still on course to be over 80% higher this year than in 2020. Even with its slower expansion this year, China will surpass Europe at the end of 2022 to become the market with the largest total offshore wind capacity in the world.

China accounts for 45% of global renewable capacity additions in 2022-2023, with the commissioning of over 140 GW on average per year driven mostly by large-scale solar PV deployment. The expansion trend in China is fully in-line with the government’s 1200 GW wind and solar PV target by 2030. Annual additions are expected to remain slightly higher compared with 2020-2021, when the country saw multiple deployment rushes due to incentive phase-out schedules for onshore wind and utility-scale PV in 2020, and offshore wind and residential PV in 2021.

For India, IEA has this to say. “In India, new records for renewable capacity expansion are expected to be set in 2022 and 2023 as delayed projects from previous competitive auctions are commissioned, especially for solar PV. Nonetheless, the financial health of distribution companies (DISCOMs) remains the primary challenge to renewable energy deployment in India, with potential project cancellations and protracted contract renegotiations.”