The solar power highway is expected to produce 280 MWh of electricity a year – enough to power the village’s street lights. 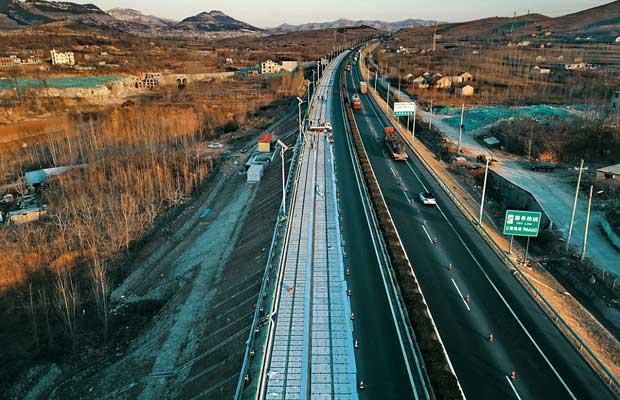 China is building a 2 km stretch of solar highway that will be able to generate electricity from sunlight. The two-kilometre-long highway located in Jinan could charge electric cars as they are travelling on it.

According to state-owned media, the solar-powered leg of the expressway will be open by the end of December. It will be able to carry up to medium-sized trucks.

Chinese engineers are using three layers to build a photovoltaic highway. The uppermost layer is paved with the so-called ‘transparent concrete’, which is said to be as strong as the traditional road-surfacing material, asphalt concrete. Then come the solar panels, the middle layer is the power-generating layer. The thirds layer is the insulation layer which separates the photovoltaic system from the damp earth.

Beyond acting as a power source, the road also provides an added benefit: The panels heat can transfer through the concrete, allowing them to automatically melt snow.

The first solar road was opened in the Netherlands and now China’s aggressive pursuit of solar in recent years, from farms to the largest solar park in the world.

The highway is built by Qilu Transportation Development Group, a state-owned company in charge of the transport infrastructure of Shandong Province, according to Jiemian News.

The road is expected to produce 280 MWh of electricity a year – enough to power the village’s street lights.