In an order dated July 29, the Central Electricity Regulatory Commission (CERC) has rejected multiple contentions by ReNew Power regarding a 250 MW ISTS connected wind energy project for 250 MW that it had won in 2018. ReNew had made SECI, as well as multiple state discoms that are buying power from the project respondents on it’s plea, centered mainly around its contention to invoke the  force majeure clause to  justify the delays on the project. It had asked for forbearance from SECI, besides cancellation of the remaining 19 odd MW that is still to be commissioned on date.

ReNew Power was selected for development of 250 MW ISTS-connected Wind Power Project, generation and sale of wind power on 02.01.2018, when it signed the formal PPA with  SECI. The date of SCoD (Scheduled commissioning date) as per the PPA to develop and commission the Project was 03.05.2019.

However, ReNew failed to deliver the rest of the project subsequently, a state of affairs it blamed on multiple issues, including

b. Unprecedented rainfall, floods and cyclone, affecting the Project from July till November 2019 (approximately 5 months);

d. COVID 19 pandemic, the consequent lockdown, and disruption in global and domestic supply chain, affecting the Project from February 2020 till date (approximately 15 months and continuing); and 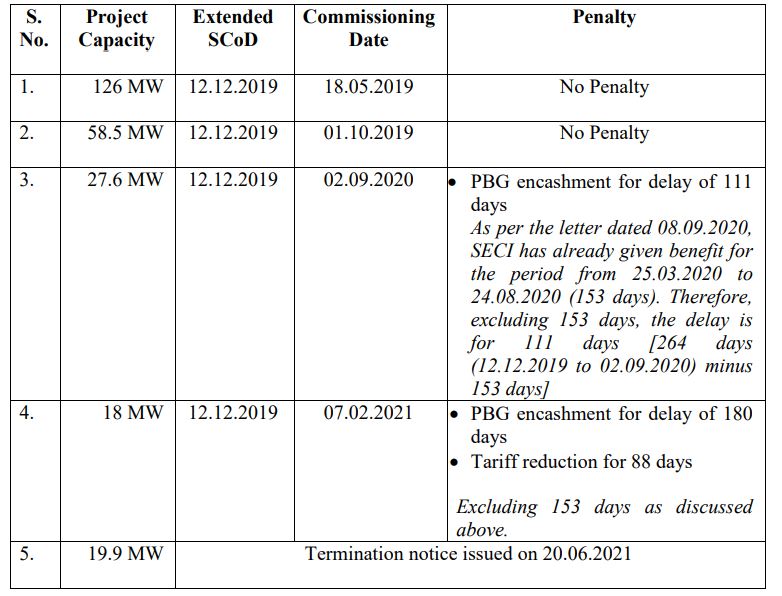 With SECI insisting on encashing it’s performance bank guarantee as well as reducing the tariff payable due to the failure to meet delivery deadlines, the two even approached the DRC (Dispute Resolution Commitee under the MNRE) on 03.11.2020 but ReNew’s  claims were rejected there too.

CERC, in its own considered judgement, ruled in favour of SECI on all the issues raised by ReNew.

In it’s order, CERC noted that based on extensions granted by MNRE for Covid related disruptions, SECI had duly passed on the  extensions to ReNew, despite the project being on a deadline that was ending pre-covid. Thus, the earliest delay, due to a delay by the MoD on permissions was accepted by SECI without any demur and extension granted.

However, ReNew’s subsequent failure to deliver, by blaming it on floods, and other causes in Gujarat during 2019 was not acceptable to the commission, in the absense of any conclusive evidence presented by the firm beyond newspaper articles, and delay in bringing up the issue. What’s more, SECI pointed out during the same period, over 613 MW of wind projects in Kutch district were commissioned without issues, including the 58 MW from ReNew itself.

What’s more, beyond the blanker extension granted after the MNRE order, ReNew, in its plea for more time beyond that period based on supply disruptions, was found to be deficient again in providing enough hard evidence, pushing the CERC to reject that reason too.

On ReNew power’s apprehensions regarding the (non) scheduling of power from UPPCL, the commission again took the view that ReNew, having signed the PPA with SECI, was bound to stick to the contract as mentioned in the PPA. In other words, it was not it’s lookout to worry about the PSA linked issues of UPPCL, SECI or others. Thus, even that, as a reason for a go slow on the project, was rejected.

Thus, ReNew power finds itself facing liquidation damages, besides the encashment of its performance bank guarantee, and still stuck with a pending 18 MW to set up.

While a summary of the order as this article has tried to present highlights the facts of the case as per the CERC order,  it does bring out the many pitfalls between winning a bid and actually getting a project up and running. There is no doubt that ReNew did face multiple delays, some of which were condoned, and some, not. It’s rejection of the DRC view also underscores the limitations of the DRC to speed up dispute resolution.

ReNew of course faces a situation where it might not make returns on the project at all, as the long delay has been compounded by hike in many costs it might have to bear now, besides the punitive actions by SECI. It remains to be seen if it goes in appeal to APTEL.