“The government has set an ambitious target of 175 GW of renewable power installed capacity by the end of 2022, of which 58 GW has been installed so far,” said Vardhan. 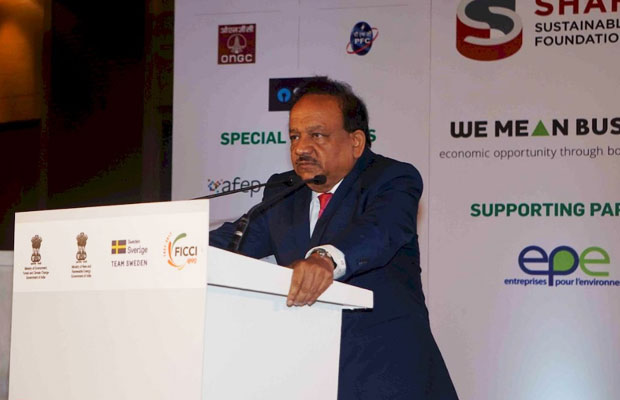 Minister of Science & Technology, Environment, Forest and Climate Change Dr. Harsh Vardhan on Thursday said the government is aiming to install 175 GW of renewable power capacity by the end of 2022.

Addressing the third Business and Climate Summit (BCS) here, Vardhan revealed that the government is also exploring other initiatives, including distribution of energy efficient appliances and provision of free cooking gas connections to women below the poverty line.

Through missions such as AMRUT and Smart Cities Mission, the government aims to transform cities to make them efficient and climate resilient, he added.

“The government has set an ambitious target of 175 GW of renewable power installed capacity by the end of 2022, of which 58 GW has been installed so far,” said Vardhan.

Echoing Prime Minister Narendra Modi’s opinion on sustainability, Vardhan said the developed world that has attained its current lifestyle through fossil fuel-induced industrialisation needs to realise that even with the use of less natural resources, it was possible to have better living conditions.

With regards to tackling climate change, Vardhan said the private sector was an integral part of India’s action on it. The voluntary actions embarked upon by Indian industry include the carbon disclosure programmes whereby the private players report their carbon management strategy and Green House Gas (GHG) emissions. He said that India was also planning to establish a voluntary carbon market with World Bank assistance with focus on uncovered areas.

As for global action to tackle climate change, the Minister said that in order to strengthen the pre-2020 actions and close the emissions gap, there is a need to agree on a timeline for early ratification of the second commitment period of the Kyoto protocol.

The United Nations Framework Convention on Climate Change (UNFCCC) should enveadvour to promote developed country parties in fulfilling their commitments in the pre-2020 period, he said.