CDF and IRENA Partner to Support Energy Transition in the Caribbean

IRENA has signed an MoU with CDF to support a transition to a low carbon economic development model in the Caribbean Small Island Developing States (SIDS).

The International Renewable Energy Agency (IRENA) has signed a Memorandum of Understanding with the CARICOM Development Fund (CDF) to support a transition from fossil-fuel dependency to a more resilient and sustainable low carbon economic development model in the Caribbean Small Island Developing States (SIDS).

The partnership will focus on reducing the region’s economic and social vulnerability to the adverse impacts of climate change, and liberating the region from a dependency on volatile and expensive fossil fuel imports. The Latin America and Caribbean region has the potential to source up to 85 percent of its power from renewables by 2030. Doing so would significantly improve energy security and reduce energy system costs. The two organisations will also work enhance business competitiveness in the region.

At the recent signing of the MOU between the two organisations, CEO of the CDF Rodinald Soomer stated that “there is an acknowledged need for greater technical and financial assistance to support the build out and strengthening of the ecosystem around sustainable energy in the Caribbean. In response to this deficiency, the CDF will soon launch the Credit Risk Abatement Facility (CRAF), which seeks to incentivise additional lending from local financial institutions to the private sector for low-carbon interventions in CDF Member States. The new partnership with IRENA will complement this Facility by helping to provide and leverage resources for targeted technical and financial assistance and training to beneficiaries and stakeholders.”

This new partnership will also augment the ongoing efforts of the CDF to provide direct financial and technical support to sustainable energy investments in its CARICOM Member States through Country Assistance Programmes targeting disadvantaged countries, regions and sectors operating in the CARICOM Single Market and Economy (CSME). 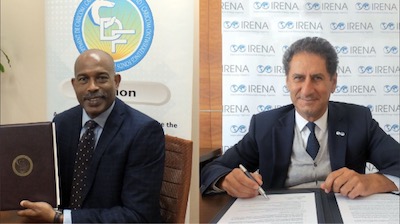 Signing of the MoU

Francesco La Camera, Director General of IRENA said “partnerships are the cornerstone of the achievement of the sustainable development goals. Caribbean countries, like all small island development states, have the potential to realise transformative benefits from low-carbon economic growth agenda.

“Working together with the CDF, IRENA reinforces its commitment to renewable energy transformation in small islands, and to mobilizing the capital necessary to scale up the adoption of renewables and energy efficiency measures. This agreement complements the Agency’s ongoing efforts to strengthen the enabling environment and crowd in investment capital to meaningfully accelerate decarbonisation progress,” he concluded.

IRENA and the CDF have agreed to collaborate in the following areas: