Mitrex, a Toronto-based manufacturer of integrated photovoltaics, has released its latest product—a photovoltaic noise barrier (PVNB). Offering a Noise Reduction Coefficient (NRC) rating of up to 0.7 through ASTM C423 testing, solar power production, and enhanced aesthetics for use on roads and highways.

In collaboration with noise barrier industry players including Durisol and Silentium Group, Mitrex was able to bring to market a photovoltaic noise barrier that seeks to energize highways throughout North America. The solar power produced by these new, innovative noise barriers can be directly supplied and used by nearby infrastructure. 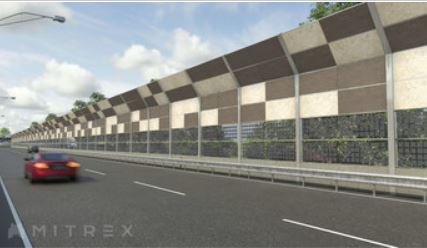 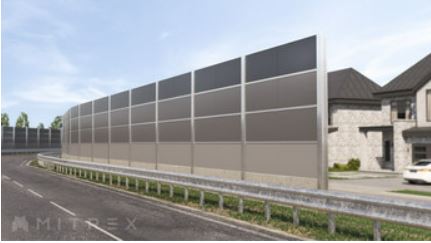 With a capacity of up to 22 W/SF on a single side (and 37.4 W/SF on a bi-facial barrier), these highway noise barriers aim to transform roadways into energy generators while maintaining the structure’s functionality. On average, each kilometer will be a power plant generating over 1.2 megawatts of electricity. The firm claims that PVNBs can even be offered in virtually any design, including opaque and transparent options.

The truly significant aspect of Mitrex PVNB panels is their noise-absorptive characteristics. With performance comparable to existing absorptive noise barriers, the ability of these PVNBs to reduce unwanted traffic noise while also producing energy is the first type of noise barrier wall system in its class.

Both Durisol and Silentium Group have selected some of their existing noise barrier wall systems throughout North America to begin retrofitting them with Mitrex absorptive PVNB panel technology. These pilot projects with government entities are aimed to capture data and analyze the PVNBs.

Expanding from typical building-integrated solar technology (BIPVs), Mitrex envisions a future where every surface touched by the sun produces renewable energy to minimize our contribution to global warming.

Until recently, Mitrex was known more as a  developer and manufacturer of solar integrated BIPV materials such as facades, roofs, railings, windows, etc. With roots in the construction industry and BIPVs, Mitrex is beginning to expand into road-integrated photovoltaics, with the ultimate goal of integrating solar into all surfaces with access to sunlight.