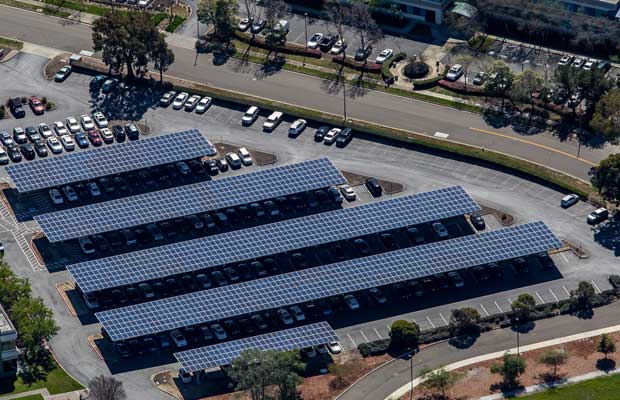 A strong public-private partnership with AMP, whose solar rebate program in concert with the federal investment tax credit (ITC) enabled the rooftop and carport projects to move forward, made the overall project a success. The utility has several programs that support renewable energy and energy efficiency, helping to further reduce greenhouse gas emissions. In 2015, some 20 percent of AMP’s electricity came from renewable energy sources.

“Alameda Municipal Power was pleased to partner on this project and support the growth of solar power in Alameda,” said Liz Warmerdam, AMP’s interim general manager. “This project recently became the final project to reserve funding from AMP’s solar rebate program, which was created by the State of California.”

Harbor Bay I & II LLC, the property owner, is pleased to provide the added amenities of covered parking under the solar PV carport canopy and the electric vehicle charging stations to its tenants. The solar installation supports corporate sustainability goals and LEED certification, while increasing the environmental quality for the greater Alameda community.

“We believe that solar energy is a win for businesses, the community, and the environment,” said Steven Ross, owner of Sun Air Solar, the PV system owner. “We are excited about our solar installations pipeline.”

Over its 25-year lifespan, the carport and rooftop PV systems will reduce CO2 emissions by more than 20,000 metric tons, equivalent to more than 48 million miles driven by passenger cars or almost 22 million pounds of coal burning. Together, the rooftop and carport solar PV systems will generate 1,147 MWh per year, energy equivalent to the annual electricity consumption of 119 homes.

“We’re proud to continue our ongoing partnership with Harbor Bay I & II to help them and their tenants benefit from clean, affordable solar energy,” said Tobin Booth, PE, founder and CEO of Blue Oak Energy. “Solar energy has become the new business as usual, and we applaud Harbor Bay for its continued leadership in and commitment to renewable energy.”

In tandem with the solar project, and at Abbott’s request, Sun Air Solar also doubled the number of its on-site electric vehicle charging stations to four.