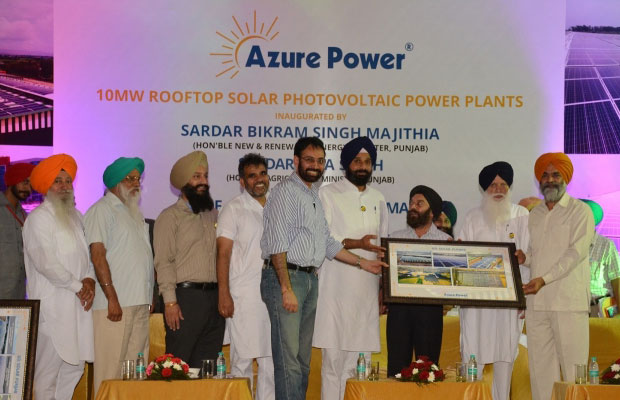 Azure Power has installed a 10MW rooftop solar PV project in Mohali, Punjab. The 10 MW solar rooftop project is spread across eight locations in the state.

Power produced by the solar plant will be sold to Punjab State Power Corporation Limited under 25-year power purchase agreement (PPA) at a tariff of Rs. 7.59/kWh. The company in a statement said that this is one of the country’s largest grid-connected solar rooftop projects.

Azure Power currently maintains a leading position in the state of Punjab. Starting from a 2MW project in 2009 in Awan, Azure Power has expanded its total solar portfolio to 225 MW in the state, currently making it the largest owner and operator of solar power plants in Punjab.

Speaking on the occasion, the Minister for New & Renewable Energy, Bikram Singh Majithia said, “Azure Power was the first to commission a solar power plant in the state of Punjab in 2009. Since then the company has commissioned over eight projects and hence has supported Punjab state’s renewable energy targets.”

The solar plant was commissioned in less than ten months from the signing of the Power Purchase Agreement (PPA). With a combined investment value of Rs.1, 000 crore, these two plants will generate power to meet the electricity requirements of the nearby villages said the company in a statement.

The 10 MW solar rooftop project is spread across eight locations in the state of Punjab. The electricity generated by the plant will be sold to Punjab State Power Corporation Limited at a tariff of INR 7.59 kWh for a period of 25 years.