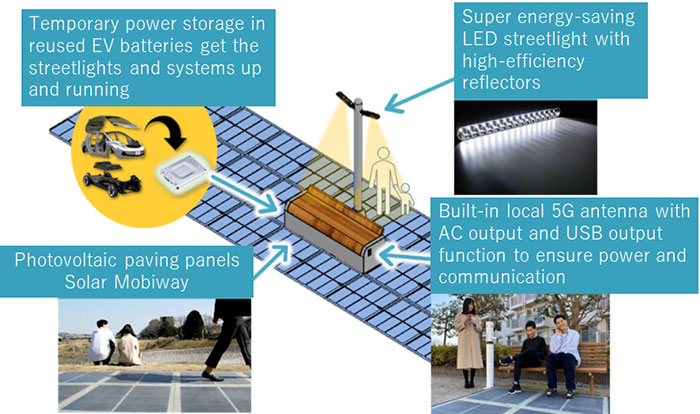 With its unique battery grading technology and MBMS (Multiple Battery Management System), MIRAI-LABO has succeeded in recycling (reusing) used EV batteries for autonomous street lighting dubbed “THE REBORN LIGHT.” In the future, along with the spread of systems that utilize reused EV batteries, including the AIR (Autonomous Intelligent Road) solar power generation pavement, known as Solar Mobiway, and distributed power generation and distributed power storage systems, a large number of reused EV batteries will be buried under the road.

Aucnet, on the other hand, has been engaged in online auctions for 35 years in several business areas, including used cars. In the automobile business, Aucnet conducts inspections and grading of more than one million used cars per year through AIS Inc., which was established with investments from companies handling used cars of Toyota, Honda, Nissan, Mazda and Subaru. In addition, in the digital product business, Aucnet performs data erasure, inspection and grading of over two million used smartphones, PCs, etc. per year, and sells them both domestically and internationally through global auctions. In this way, Aucnet has established know-how not only in inspection, but also in the standardization of grading technology for circulation-based auction distribution.

The two companies will share each other’s technology and know-how through a capital and business alliance concluded in 2019, and have now decided to prepare for entry into the new regenerative EV battery business and related markets.

In the automotive industry, the shift to EVs is underway worldwide from the perspective of environmental protection and sustainable development. On the other hand, although lithium-ion batteries installed in EVs utilize cutting-edge technology and rare mineral resources, a scheme for lifetime reuse to maximize their value has yet to be established. Through this joint project, Aucnet and MIRAI-LABO hope to contribute to the sustainable development of the automotive industry and to the solution to environmental issues by realizing the secondary distribution of EVs and the recycling and distribution of lithium-ion batteries.

In addition, by establishing inspection and grading technology for EV batteries, this project will also address the proper evaluation and formation of a fair price for used EVs, which are said to be more prone to decline in residual value compared to fuel vehicles. Aucnet and MIRAI-LABO will launch a joint project by the end of February 2021, which will make a significant contribution to achieving the U.N. SDGs.