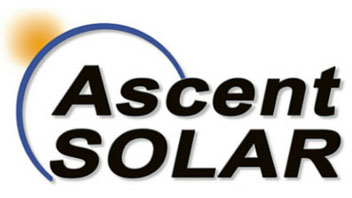 Total net revenue booked for the third quarter of 2016 was $453K, a recovery of approximately 78% from second quarter 2016. Gross shipments for the period were about $1.1M but net revenue booked for the same period was limited to $453K. This was due to a substantial deferment in revenue recognition — in compliance with the US GAAP accounting rules — as a result of a contract modification with one of the Company’s largest customers. Allowances for RMA (Return Merchandize Authorization) also contributed to lower net revenue booked.

“We are focused on improving our results as we head into the final period of this year,” commented Victor Lee, President and CEO of Ascent Solar Technologies, Inc. “On the back of the poor second quarter showing, we are confident that the worst is behind us as we continue to streamline our business model and further execute our growth plan. Given the continuous expansion of our retail footprint, particularly with the increased penetration of our distribution effort to now more than 1,500 Verizon Wireless authorized retail stores, we remain optimistic on the opportunities ahead for growth.”

Mr. Lee concluded, “We have also made great progress in the defense and emergency power market, particularly in the increasing interest shown in our award winning, military-graded MilPak™ E solar and battery integrated blanket, which we believe will add to revenue growth in 2017 and beyond. We look forward to updating our shareholders as we work through the next phase of our development.”

How World Record Low Solar Prices Moved Out of India