A new analysis has revealed that the Asia Pacific (APAC) has now become the world’s largest wind turbine manufacturing hub after a decade of development.

A new analysis has revealed that Asia Pacific (APAC) remained a strong manufacturing hub for wind turbine OEMs with record-high supply-side deliveries. It adds that although most Asian suppliers have historically relied on turbine technologies licensed from Europe to enter the wind industry, Asia Pacific has now become the world’s largest wind turbine manufacturing hub after a decade of development. In 2019, GWEC saw eight Asian turbine suppliers making the cut in the world’s top fifteen supplier ranking, as per GWEC Market Intelligence’s latest report  ‘Supply-Side Data 2019’.

The top fifteen wind turbine manufacturers in 2019 include the eight APAC companies, all of which are based in China.  However, aside from Goldwind, Envision, and Dongfang, none of these companies exported turbines to overseas markets last year. Suppliers such as Mingyang, Windey, Sewind, CSIC Haizhuang and United Power currently rely on their home market growth in China, the world’s largest wind power market, to secure a position on the top fifteen rankings. 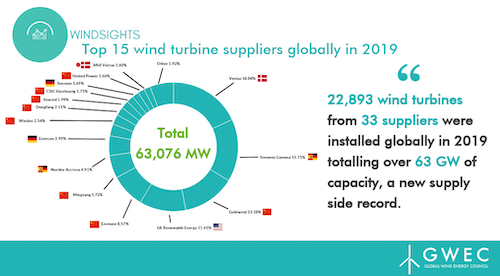 Looking beyond the top fifteen, Hitachi and Toshiba (Japan), Unison (Korea), Suzlon and Inox (India) are among the other Asia suppliers that reported turbine installations in 2019.

The Supply Side Analysis 2019 report shows the consolidation of the wind industry has continued, with the number of OEMs declining from 37 in 2018 to 33 in 2019 – these four suppliers that did not report installations in 2019 are all from the APAC region.