South Africa, long plagued by inefficiencies at national discom Eskon, has decided to move decisively to change the narrative. The country, facing further 2 years of load shedding as projected by Eskom, has made a plan to add 14.771 GW of new wind, solar and battery storage capacity to the national grid. Ever since 2010, the country has been facing ever increasing power shortages leading to hours long load shedding that have become a part of daily life in the country now. The key reason has been the failure of Eskom to switch quickly to renewables, hobbled as it is by its high operating costs and unsustainable debt. The utility, which trades with at least seven countries in the neighbourhood, was pushed to the brink as it supplied power to more people post-apartheid, without a fix on governance quality.

To ensure the new plans actually happen, the country has also dropped an impractical rule insisting on 100% local content in solar panels, reducing it to a much more manageable 30%. The 100% rule was effectively acting as a non-tariff barrier to faster adoption of solar in the country. Currently, the pipeline of private-sector embedded generation projects has grown to over 100 projects representing a total capacity exceeding 9 GW. If these happen, they should help being down load shedding during daylight hours.

The suggestions from the National Energy Crisis Committee (NECOM) are part of its 6-month progress update  on the implementation of the Energy Action Plan, for January 2023. Among other plans, at residential level, a net metering plan is also being finalised to support residential rooftop solar. 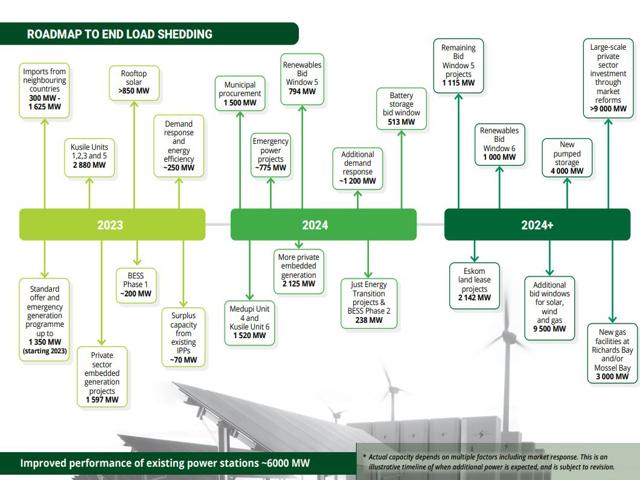 Departments have also been instructed to streamline regulatory processes for energy projects. Measures include reducing environmental authorization timeline by half from over 100 days earlier to now 57 days. Grid connection approvals will also be provided within 6 months and the time for registration process has been lowered to 3 weeks, from 4 months till now.

In the short term, the government hopes to buy around 1 GW power generation capacity from its neighbors after having already imported 300 MW through the Southern African Power Pool (SAPP).

South Africa really needs to get a move on, as one of the most developed countries in Africa. Held captive to vested interests, the extended paralysis in decision making at Eskom has cost the country dear in terms of productivity and competitiveness.