The commissioning of this solar power plant confirms the Technique Solaire’s strategy and its position among the leading French players to succeed in setting up projects in India. 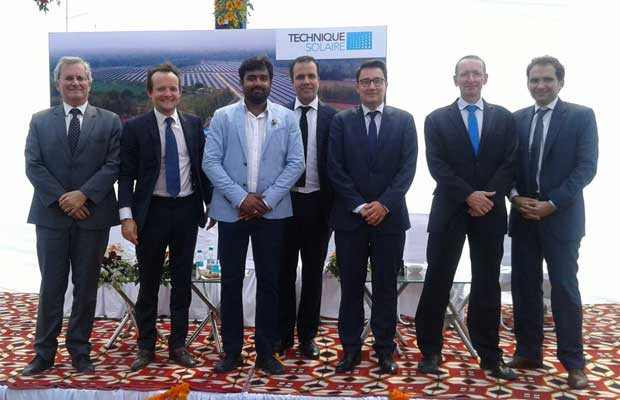 On March 31, 2017, Technique Solaire commissioned its first project in India, in the state of Uttarakhand. This solar power plant, with a total power of 5.5 MWp spread over 25 acres of land located at Village Maheshwari, Bhagwanpur, Uttarakhand, was awarded a state tender to JLTM Energy India Pvt. Ltd., Indian subsidiary of Technique Solaire, in October 2015. This installation represents an investment of approximately € 4M (INR 27 crores) and produces the equivalent of the local consumption of 13,500 inhabitants. We have developed a unique model in which local village farmers are made stakeholders in the project and they benefit from yearly income from the plant. After many months of work for securing the land and financing the project, the works on the project were finished in less than three months.

In  2013,  Manu  Bishnoi  approached  Technique  Solaire  and  proposed  to jointly  work  in  the Indian  solar  market.  Technique Solaire being a young & dynamic company founded by Thomas De Moussac, Lionel Themine & Julien Fleury agreed to start working on developing projects in India after seeing the potential of the country in solar energy. We did the ground work for the initial years on the regulatory matters and to understand the tender mechanism. Being  a  small  company  we  had to  operate  with  minimum  expenses  and  risk. In 2015, we participated in a tender conducted by Uttarakhand Renewable Energy Development Agency (UREDA) and won a 5 MW project.

The commissioning of this solar power plant confirms the Group’s strategy and its position among the leading French players to succeed in setting up projects in India. Technique Solaire group initiated its international development strategy with the creation of its subsidiary, JLTM Energy India Pvt. Ltd., in 2014.

This first project in India demonstrates the ability of Technique Solaire and its team to implement solar projects in a complex and highly competitive international environment, from the development phase to the operational phase.

Within the framework of the financing of this project, Technique Solaire was able to rely on the support of its historical financial partners (BPI France and Crédit Agricole).

With this first success, and the ambition of the Indian government to develop solar energy with a goal of 100 GW by 2022, Technique Solaire intends to develop more than 200 MWp of projects in India in the coming 2-3 years.

At the same time, the group continues to study its development strategy in one or two more countries other than India.