Africa To Get Its Fair Share Solar Power Soon- Report

The 2020  Intersolar Africa Market Report 2020,  produced by Intersolar Europe in association with BSW solar (Germany) and Becquerel Institute, points to the huge potential across the African continent, and some new opportunities for solar in Africa.

Africa, the continent with a population equal to India and total area of over nine times India, is open for solar finally.  The 2020 Intersolar Africa Market Report  analyses the market conditions of 16 of its countries makes a case for a strong push in Africa, going as far as to say that the continent has a chance to leapfrog the legacy energy pathways directly to solar.

The installation rates last year in the continent remained very low, even though renewable energy is right at the top of the political agenda in many of the African countries.

Out of all the photovoltaic plants installed worldwide, the continent is home to a magre one percent with about 6.6 gigawatts (GW) of production. The report has taken a much closer look at the market including  a select few countries such as Uganda, Madagascar, Kenya, Mali, Tunisia and Senegal for the first time. Factors which were investigated were the various phases for photovoltaics in the markets of the different countries, along with the various different regulatory conditions and potential for the installation of photovoltaic plants.

Many of the countries analysed as potential sites for installations are already getting work done at a good pace. For example, by the year 2024, Algeria has planned to install systems which will have a combined capacity of 4 GW. While this and many other plans are in the ideation phase, the end of 2019 brought with it the completed Benban Solar Park, situated in Egypt. 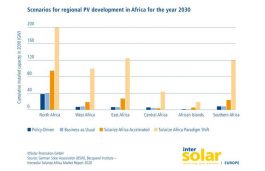 Benban has a total capacity of 1.5 GW because of the six million photovoltaic panels that it has. Currently, it is the biggest solar park in the continent and one of the largest on Earth. Moreover, there are plans to add another 3.6 GW of energy capacity by 2027.

An area that should be of particular interest is the focus on microgrids and  intersection of clean water and solar.

Since half a billion people in sub-Saharan Africa live without access to electricity, this year’s report analyzes the competitiveness of standalone local power grids, or microgrids, for the first time. It is estimated that Africa makes up about half of the world market for these grids. Clean and reliable electricity is key to improving economic and societal conditions in African countries.

A billion people in Africa do not have access to clean drinking water. Water desalination and purification plants as well as pump units powered by photovoltaic systems are needed as one of the building blocks of a safe and environmentally friendly water supply. The lack of clean water is thus also a driving factor for photovoltaics deployment worldwide – while photovoltaics forms part of the solution to the many challenges present in this area. One example of the rise in innovative solutions for water and photovoltaics in Africa can be seen in Kenya. A solar-powered microgrid desalination plant on the coast supplies 25,000 people with fresh water every day. Floating photovoltaic installations are also already in use in parts of Africa.

According to David Wedepohl, CEO of German Solar Association, “Africa is on the threshold of a major transformation, which can best be described as a kind of wave that just keeps swelling. We are excited to see what will come next.” This comes at a time when Kenya is planning installations that will generate 500 MW and in Mali, plans to create a solar park have just been finalized.

One of the major takeaways from the report were the four possible scenarios that could play out for the future of photovoltaics in the continent.

For Africa, with its huge diversity and large countries with unique challenges, the energy challenge is one of the few common issues. The current population in Africa has surpassed 1.3 billion people. Only half the population has access to electricity, and more specifically around 79 % in urban and 35 % in rural areas . The energy consumption per capita is amongst the lowest globally, with large disparities between the economically developed cities and rural areas. Access to electricity, much like in India, is a non negotiable issue that will ensure that demand continues to rise for decades to come. And solar offers one strong hope to provide an answer, over other options powered by fossil fuels that could do more damage to the  host countries and the environment.

The report even has a ranking for PV attractiveness inside, based on multiple parameters for each country. In some ways, that also implies that country rankings cold change too.

The International Solar Alliance (ISA)founded by India and France too has a strong African presence, with countries actively looking to find solutions to their energy needs from solar. Thus, a strong market led solar movement is also evolving, after years of donor led installations in key markets.