• Eyeing massive growth in the Indian renewables industry
• Committed to broaden its footprint to more than 2,500 towns in India

Adani Solar, the Adani Group’s solar manufacturing arm, has  announced the launch of its retail distribution business in Tamil Nadu with Festa Solar as the official channel partner for the region. Adani Solar has now extended its reach to more than 2,500 towns for the distribution of solar panels in India.

Through this partnership with Festa Solar, Adani Solar aims to rapidly penetrate and capitalize on Tamil Nadu’s renewable energy market. With the Tamil Nadu government promoting solar power across the state through Rooftop as well as the Pradhan Mantri Kisan Urja Suraksha evam Utthaan Mahabhiyan Yojana (KUSUM) segments the state is set to see high demand.

The installation of Adani Solar’s off-grid panels will help consumers mitigate the risks of power-cuts while its on-grid panels will assist in reducing electricity costs. Adani  Solar envisages an opportunity of 500 MW within these segments in the region. The target customers are predominantly in the rooftop, utility-scale, residential, commercial & industrial (C&I), and solar pump segments.

Rahul Bhutiani, Head – Sales & Marketing, Adani Solar, said, “We are delighted to partner with Festa Solar in the retail distribution space. The Indian renewable energy sector has witnessed tremendous success in the installation and supply of solar power. We will be offering power facilities via solar panel distribution to customers at competitive rates for applications in the Tamil Nadu market. This region has enormous investment opportunities in renewable energy. Festa Solar, as the authorized channel partner of Adani Solar, will be responsible for all the solar retail requirements in the region.” 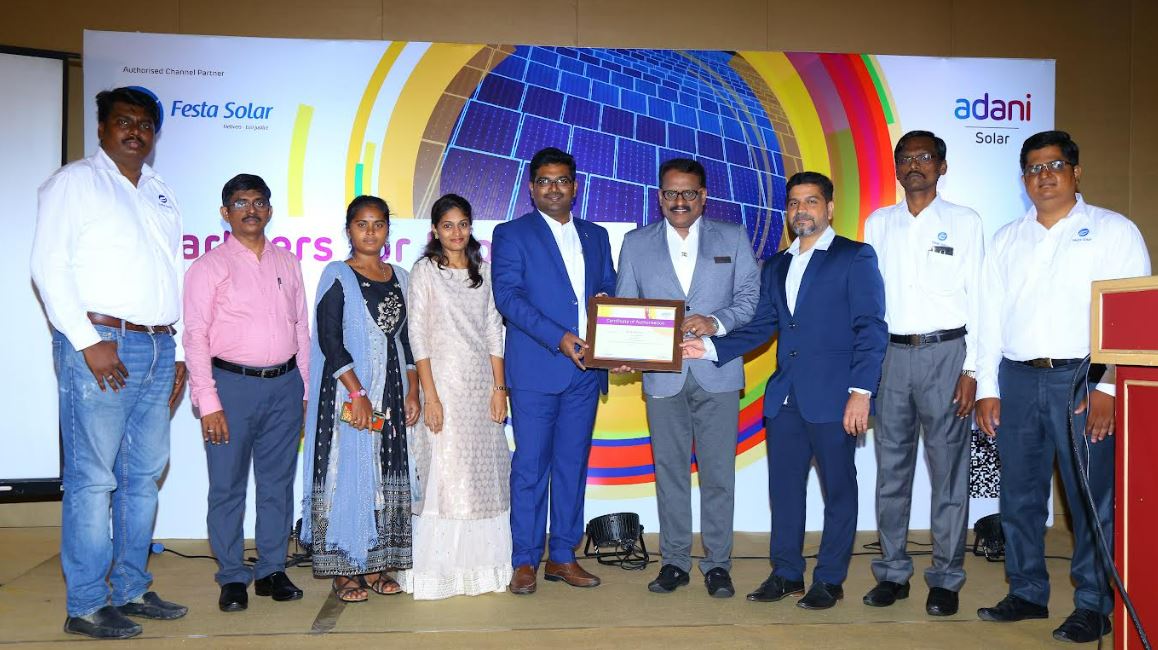 The Adani and Festa team at Launch Event

On the retail front, Bhutiani added, “Adani Solar will target 50% market share. We look forward to achieving higher reach and visibility for our product nationally by increasing power consumption through alternative forms of energy like solar energy.”

Adani Solar has rapidly expanded its retail presence across the country. Through its retail channel partners, the company has a sizeable presence in Rajasthan, Uttar Pradesh, Delhi, Haryana, Gujarat, Madhya Pradesh, Maharashtra, Kerala, Tamil Nadu, Telangana, Andhra
Pradesh, Kerala, West Bengal, Odisha, Assam, Manipur Mizoram, Arunachal Pradesh, Meghalaya, Nagaland, and Tripura. Adani Solar claims to be a market leader in the segment and is the only manufacturer with IEC 2016 certification in all SKUs.
Adani Solar is the solar PV manufacturing arm of the Adani Group with 3.5 GW of PV Solar Cell and module manufacturing capacity, at Mundra, Gujarat.

“Where There Is Demand At Retail Level, Our Modules Should Be There”
Also Read

Festa Solar has been an active Solar EPC projects company and Solar Products Distribution company from Chennai in Rooftop and Ground mounted, C&I segment. Part of the  Chennai Institute of Technology, MK Auto components, Gokul Autotech, Chennai Heat Treaters group of companies’ who are well known manufacturers of a range of automotive components and equipment supplies to almost all vehicle manufacturers in India for past two decades, Festa Solar Private Limited is the group’s arm for venturing into the renewable sector.