Acciona Puts in Services its 145 MW Wind Farm in Texas

Acciona has put into service the 145 MW Palmas Altas Wind Farm, its ninth in the US, with a total investment of some USD200 million. 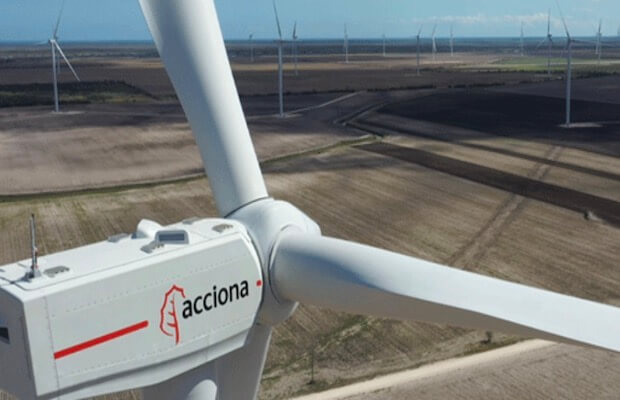 Acciona has put into service the Palmas Altas Wind Farm, its second one installed in Texas and its ninth in the US, with a total investment of some USD200 million (around EUR180 million at current exchange rate). The wind farm features 46 Nordex technology wind turbines totaling 145 MW capacity.

Located in Cameron County, near the San Roman wind farm that ACCIONA started up in December 2016, the new facility will produce around 524 gigawatt-hours (GWh) of clean energy per year, equivalent to the consumption of 43,000 U.S. households. It will offset the emission of 503,000 metric tons of CO2 – the equivalent of taking more 100,000 cars and trucks off the road.

The Palmas Altas project employed approximately 170 people at the peak of construction. Now that is completed, a 10-person operations team will staff the wind farm over its 25-year lifespan.

The wind turbines installed in Palmas Altas are Nordex’s AW125/3150 model with a rotor diameter of 125 meters, mounted on an 87.5-meter steel tower (hub height). The energy produced by the wind farm will be sold in the ERCOT-South Texas wholesale market.

Currently, the firm has 1,047 MW of wind power capacity in the USA and Canada.

In its solar portfolio the group has recently acquired from Tenaska a portfolio of photovoltaic projects in seven states across the country with approximately 3,000 megawatts (MW) of rated power in utility-scale photovoltaic plants and 1.000 MW of battery storage. The company plans to put eight of these projects into service by end-2023, rising its capacity in around 1,500 MW (some 1,200 rated MW).

Recently, we reported that the Spanish conglomerate group had put two new renewable energy projects into service in Chile in the last trimester: the San Gabriel wind farm (183 MW) in the region of La Araucanía and the Almeyda photovoltaic plant (62 MWp) in the region of Atacama. And in doing so it had increased its operating capacity in the country by 84 percent, strengthening its position as the main generator of 100 percent renewable electricity in the Chilean market.

Tags: Acciona, Acciona Wind, International, Texas, US, Wind
"Want to be featured here or have news to share? Write to info[at]saurenergy.com