A Solar Cell That Does Double Duty for Renewable Energy

In the quest for abundant, renewable alternatives to fossil fuels, scientists have sought to harvest the sun’s energy through “water splitting,” an artificial photosynthesis technique that uses sunlight to generate hydrogen fuel from water. But water-splitting devices have yet to live up to their potential because there still isn’t a design for materials with the right mix of optical, electronic, and chemical properties needed for them to work efficiently.

Now researchers at the U.S. Department of Energy’s Lawrence Berkeley National Laboratory (Berkeley Lab) and the Joint Center for Artificial Photosynthesis (JCAP), a DOE Energy Innovation Hub, have come up with a new recipe for renewable fuels that could bypass the limitations in current materials: an artificial photosynthesis device called a “hybrid photoelectrochemical and voltaic (HPEV) cell” that turns sunlight and water into not just one, but two types of energy – hydrogen fuel and electricity. The paper describing this work was published on Oct. 29 in Nature Materials. 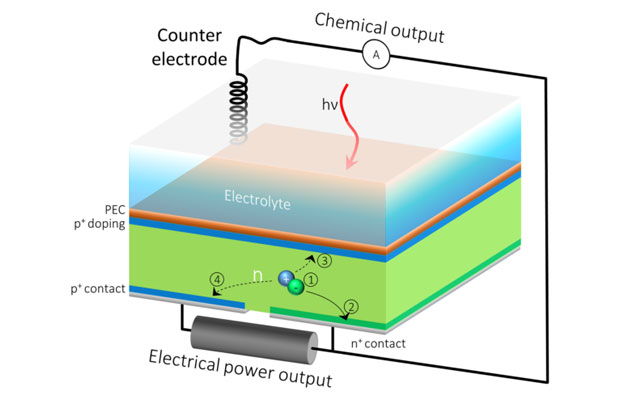 The HPEV cell’s extra back outlet would allow the current to be split into two, so that one part of the current contributes to solar fuels generation, and the rest can be extracted as electrical power. (Credit: Berkeley Lab, JCAP)

Finding a way out for electrons

When each layer absorbs light it builds an electrical voltage. These individual voltages combine into one voltage large enough to split water into oxygen and hydrogen fuel. But according to Gideon Segev, a postdoctoral researcher at JCAP in Berkeley Lab’s Chemical Sciences Division and the study’s lead author, the problem with this configuration is that even though silicon solar cells can generate electricity very close to their limit, their high-performance potential is compromised when they are part of a water-splitting device.

The current passing through the device is limited by other materials in the stack that don’t perform as well as silicon, and as a result, the system produces much less current than it could – and the less current it generates, the less solar fuel it can produce.

“It’s like always running a car in first gear,” said Segev. “This is energy that you could harvest, but because silicon isn’t acting at its maximum power point, most of the excited electrons in the silicon have nowhere to go, so they lose their energy before they are utilized to do useful work.”

Getting out of first gear 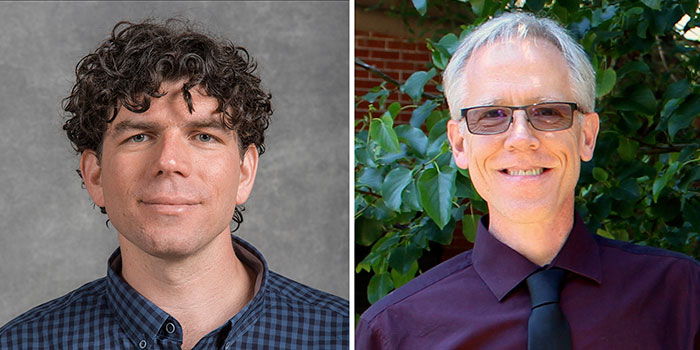 “We thought, ‘What if we just let the electrons out?’” said Segev.

In water-splitting devices, the front surface is usually dedicated to solar fuels production, and the back surface serves as an electrical outlet. To work around the conventional system’s limitations, they added an additional electrical contact to the silicon component’s back surface, resulting in an HPEV device with two contacts in the back instead of just one. The extra back outlet would allow the current to be split into two, so that one part of the current contributes to solar fuels generation, and the rest can be extracted as electrical power.

When what you see is what you get

After running a simulation to predict whether the HPEC would function as designed, they made a prototype to test their theory. “And to our surprise, it worked!” Segev said. “In science, you’re never really sure if everything’s going to work even if your computer simulations say they will. But that’s also what makes it fun. It was great to see our experiments validate our simulations’ predictions.” 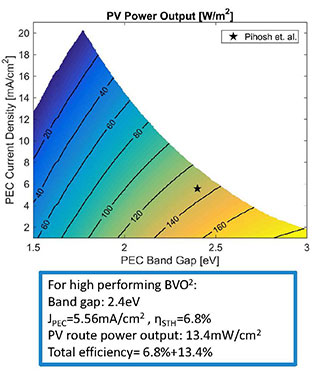 According to their calculations, a conventional solar hydrogen generator based on a combination of silicon and bismuth vanadate, a material that is widely studied for solar water splitting, would generate hydrogen at a solar to hydrogen efficiency of 6.8 percent. In other words, out of all of the incident solar energy striking the surface of a cell, 6.8 percent will be stored in the form of hydrogen fuel, and all the rest is lost.

In contrast, the HPEV cells harvest leftover electrons that do not contribute to fuel generation. These residual electrons are instead used to generate electrical power, resulting in a dramatic increase in the overall solar energy conversion efficiency, said Segev. For example, according to the same calculations, the same 6.8 percent of the solar energy can be stored as hydrogen fuel in an HPEV cell made of bismuth vanadate and silicon, and another 13.4 percent of the solar energy can be converted to electricity (see figure, left). This enables a combined efficiency of 20.2 percent, three times better than conventional solar hydrogen cells.

The researchers plan to continue their collaboration so they can look into using the HPEV concept for other applications such as reducing carbon dioxide emissions. “This was truly a group effort where people with a lot of experience were able to contribute,” added Segev. “After a year and a half of working together on a pretty tedious process, it was great to see our experiments finally come together.”

The Joint Center for Artificial Photosynthesis is a DOE Energy Innovation Hub.

The work was supported by the DOE Office of Science.