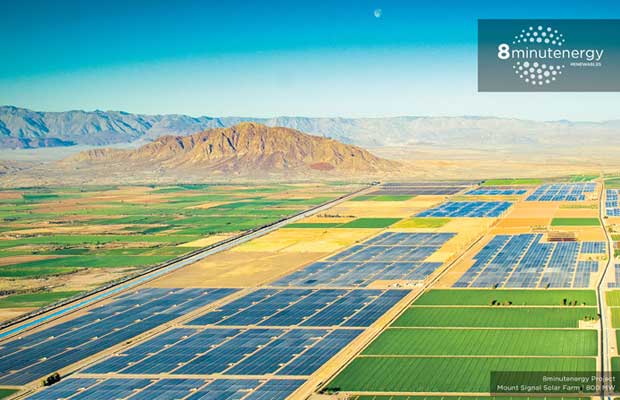 Third phase of Mount Signal Solar Farm, among the largest PV projects worldwide, will be developed by 8minutenergy and owned by Capital Dynamics.

8minutenergy Renewables, the largest independent solar power developer in the U.S., and global private asset manager Capital Dynamics, has announced the acquisition and development of the 328 megawatt-DC Mount Signal 3 (“MS3”) solar photovoltaic (PV) project. The project is located in the city of Calexico in California’s Imperial Valley, and is the third phase of the 800 MW Mount Signal Solar Farm, which is among the largest PV projects in the world.

Capital Dynamics acquired Mount Signal 3’s equity interests from 8minutenergy, who will continue to be the project developer. Although terms of the transaction are not being disclosed, Capital Dynamics is currently arranging tax equity and debt financing for the project, with financial closing expected in late July 2017.

8minutenergy started developing Mount Signal 3 in 2011, and has already completed all procurement and construction contracts. Mortenson Construction was appointed as the engineering, procurement, and construction (EPC) contractor, and will be hiring for 300-400 local construction jobs, starting this year. First Solar was selected as the panel supplier, providing 2.8 million Series 4 thin film panels. In addition, Southern California Edison (SCE) and 8minutenergy signed the long-term power purchase agreement in 2014 to deliver the project’s clean, renewable energy to residents in 15 surrounding counties. 8minutenergy will continue to oversee construction, and is expected to bring the plant to commercial operation by the end of 2018.

“As the original developer of the Mount Signal Solar Farm, we successfully built the 260 MW-dc Mount Signal 1 project, and brought it online in 2013. We are thrilled to bring Mount Signal 3 to fruition, which is the largest in 8minutenergy’s history,” said 8minutenergy CEO and Founder, Martin Hermann. “It’s our mission to deliver abundant and affordable clean energy, and we are certainly doing that with Mount Signal 3. Through our rigorous project development approach, we are going to once again be delivering solar power at cost-competitive rates to fossil fuels.”

“We thank our dedicated partners, including Capital Dynamics, whose exceptional team and project experience stood out to us,” said 8minutenergy President and Co-Founder, Tom Buttgenbach. “We’re proud to be working together to bring clean energy to Imperial Valley, and to do so in an environmentally-friendly manner. Mount Signal 3 will be built upon 2,000 acres of low-productivity farmland, and we will be significantly reducing water usage in the region, as well as protecting wildlife habitat during construction and operation. It’s become an ideal project for everyone involved.”

“We are proud to own the Mount Signal 3 solar project, and to deepen our relationship with 8minutenergy,” said Capital Dynamics’ Head of Clean Energy Infrastructure (CEI), John Breckenridge. “With over 3 GW of renewable assets in our portfolio, we seek quality projects with teams that we can depend upon to deliver. This transaction is consistent with CEI’s strategy of long-term ownership of high-quality power generation assets in North America and Europe.”

“Our successful experience suppling panels to 8minutenergy, as well as our strong relationship with Mortenson, enabled us to be a part of this major project,” said Roger Bredder, First Solar’s Vice President of Business Development for the Americas. “Our reliable thin film technology, with proven optimal performance in the high temperature Imperial Valley, provides savings all the way through to end users.”