As per the data released by the MNRE for the period starting January 2020 till September 2020, about 883 MW of rooftop solar was added in India.

As per the data released by the Ministry of New and Renewable Energy (MNRE) for the period starting January 2020 till Sep 2020, about 2320 MW of solar capacity comprising 1437 MW of ground-mounted solar and 883 MW of rooftop solar was added in India.

Rajasthan (360 MW), Tamil Nadu (341 MW), and Maharashtra (165 MW) were the leading States with most of the large-scale solar installations during this period. Before the COVID-19 outbreak, JMK Research had projected nearly 7-8 GW of utility-scale solar capacity addition in 2020.

However, only 1.4 GW capacity has been commissioned in the first nine months. Because of COVID-19, there were construction delays, restricted movement of equipment supply, and labour shortages eventually leading to project delays. To compensate for this, MNRE has issued a blanket extension of five months to all project developers. Now, most of this delayed capacity is likely to come up in the first half of 2021.

On the rooftop solar side, despite lockdown and COVID-19, about 883 MW of new capacity was added. Gujarat ranks first with 380 MW capacity addition, contributing nearly 43 percent of the total rooftop installations in the first nine months of 2020, followed by Rajasthan (150 MW).

The primary reason behind the significant capacity addition in Gujarat is the “Surya Urja Rooftop Yojana – Gujarat” that targets the installation of solar rooftops for 8 lakh consumers by March 2022 in the residential sector. This scheme provides 40 percent of state subsidy on installation of systems up to 3 kW of size and 20 percent subsidy for 3 kW- 10 kW.

Another reason for this upsurge in rooftop activity in Gujarat is the MSME policy introduced in September 2019 by the Gujarat state government, as part of which MSMEs are allowed to install solar projects with more than 100 percent of their sanctioned load or contract demand. Earlier the permitted installation limit was 50 percent of the sanctioned load. As per the new policy, MSMEs are also able to sell excess solar energy to the State government at a price of Rs. 1.75/ kWh. The policy also permits MSMEs to buy solar power from third parties.

After Gujarat, Rajasthan (150 MW) and Tamil Nadu (92 MW) are the leading states who have added the highest rooftop solar capacity. The detailed state-wise split of solar capacity installation trends is shown in the chart below: 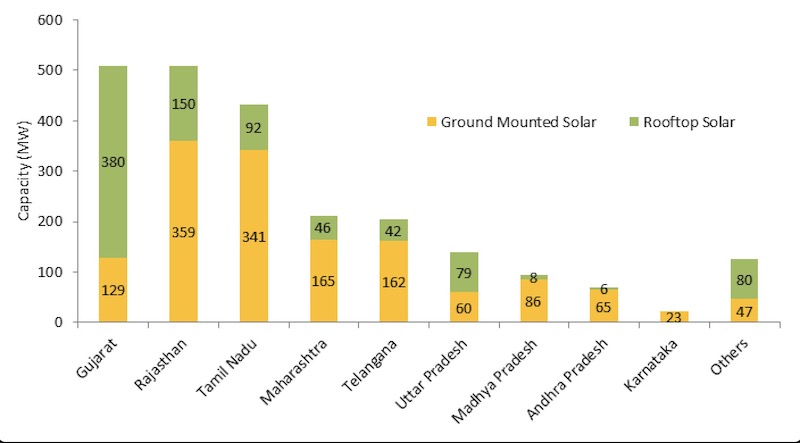